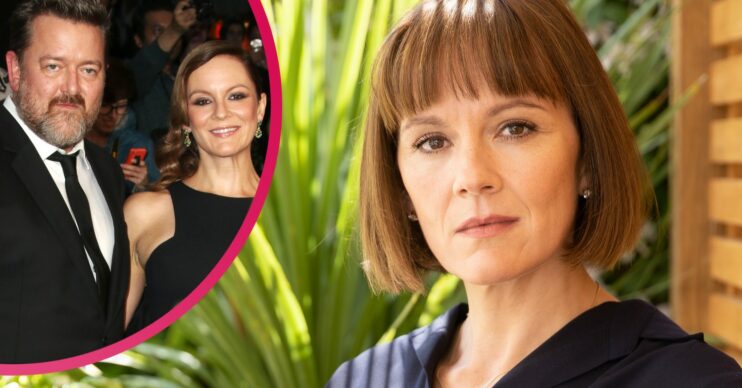 Who plays Helen in Hollington Drive on ITV1? Rachael Stirling has a very famous mum and rock star husband

She recently played a ghost in BBC One's Life!

Hollington Drive is ITV1’s hot new thriller with a cast to die for – quite literally in this case – including Rachael Stirling as Helen.

But who is her famous actress mother, and when did she meet her rock star husband?

Here’s everything you need to know about the Hollington Drive cast member.

Who plays Helen in Hollington Drive?

Rachael Stirling plays sensible primary school headteacher Helen, who is a pillar of the community.

The story centres around Rachael’s character Helen, and her sister Theresa, played by Anna Maxwell Martin.

Helen is the elder sister of the two, and described as the “sensible, pragmatic, practical one”.

The sisters appear close and their families enjoy spending time together, until a catastrophe questions everything they thought they knew.

When Theresa’s 10-year-old son, Ben, goes to play in the park with his cousin Eva, something happens that changes their lives forever…

Of course, TV viewers will recognise cast member Rachael from her acting career, which spans more than 20 years.

Who is Rachael Stirling and what is she famous for?

Rachael has been acting for more than two decades.

Her first role was as Clare Knowles in the award-winning film Still Crazy opposite Stephen Rea in 1998.

She went on to star in dozens of films and TV dramas, including Maybe Baby, Poirot, Marple, Hotel Babylon and Boy Meets Girl.

In 2002, Rachael’s role as gay Nan Astley in saucy BBC adaptation Tipping the Velvet opposite Keeley Hawes got reviewers hot under the collar.

Fans of detective series might recognise Rachael from her recent cameos in Grantchester and Midsomer Murders.

She also played Emilia in Love in the Lockdown, (the ghost of) Kelly Aston in Life, Becky in The Detectorists, and Mary Harborough in Wild Bill.

Rachael is also known as a prolific and well-respected theatre actress.

Rachael Stirling Hollington Drive: Who is her famous mum?

One of her most famous roles was as Emma Peel in the TV series The Avengers  between 1965 and 1968.

She also portrayed the Countess Teresa di Vicenzo, wife of James Bond, in On Her Majesty’s Secret Service in 1969.

Her daughter Rachael said that the cause of death was lung cancer.

He’s a Scottish theatre producer and Diana Rigg was the second of his three wives.

He has four children including Rachael, although she is his only child with Diana Rigg.

Rachael Stirling husband – who is he?

Rachael has been married to Elbow frontman Guy Garvey since June 3 2016.

They wed in a secret ceremony in Manchester, England.

The pair met at mutual friend Benedict Cumberbatch’s wedding, and have one child together.

Coincidentally, Rachael starred in BBC’s Life, and her husband wrote the theme tune My Angel.

How old is Rachael Stirling and where is she from?

Rachael Atlanta Stirling was born on May 30 1977 in St Marylebone, London.

She is currently 44 years old.

Rachael Stirling is currently playing Helen in Hollington Drive, which starts on Wednesday September 29 2021 on ITV1.

Are you looking forward to watching Hollington Drive on ITV1? Leave us a comment on our Facebook page @EntertainmentDailyFix.