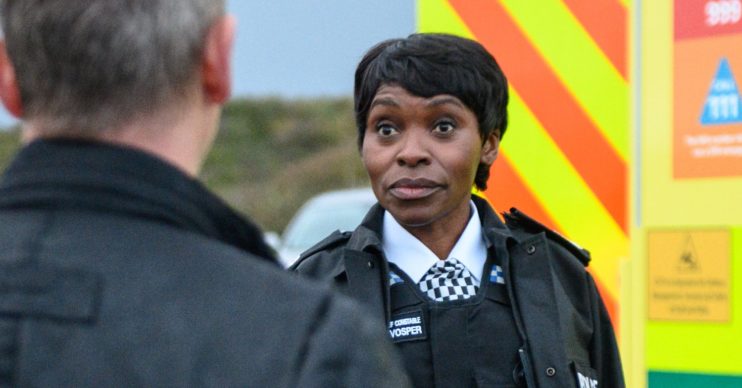 Rakie Ayola recently appeared in Shetland, and has a famous husband!

Detective drama Grace is THE drama to watch on ITV1 this weekend with a killer plot and a cast of dreams – but who plays Alison Vosper in Grace?

Viewers will recognise Rakie Ayola for her previous roles in Holby and Shetland.

Who plays Alison Vosper in Grace?

She always keeps a tight wall around her but, underneath the occasionally frosty façade, there can be a vulnerability.

She is kind and principled, and knows Roy is a good cop.

Despite rank, there is a friendship between them which comes from years of working together.

Rakie explains: “I wanted to be involved in Grace as I liked Russell Lewis’ scripts and it was the chance to work with John Simm again.

“I had worked with him very briefly on Code of a Killer and it was great to play a high ranking police officer.”

Rakie adds: “There are plenty of occasions when she could have sacked Roy but he’s a really good officer and it would be a massive loss to the force.

“He’s not going to change and it is exasperating for her.”

Rakie also applauds the diverse crew on the series.

Who plays Alison Vosper in Grace? What else has Rakie Ayola been in?

Rakie has been on our TV screens since 1993 – that’s nearly three decades!

As well as her extensive TV and film career, she is also well respected for her work in theatre.

She began her career in the theatre, performing in a number of Shakespearean plays including Twelfth Night, A Midsummer Night’s Dream, The Tempest, The Merchant of Venice and Macbeth.

She is perhaps best known for her role as Kyla Tyson in the BBC medical drama Holby City from 2006 to 2008.

The actress has also appeared in television shows including Soldier Soldier as Bernie Roberts, EastEnders, Sea of Souls and Doctor Who.

She will portray ACC Vosper in the second Grace film Looking Good Dead on ITV1 later this year.

Rakie also portrays DS Holland in the upcoming drama The Pact on the BBC.

How old is Rakie Ayola?

Rakie Olufunmilayo Ayola was born in May 1968.

Where is Rakie from?

Rakie is a Welsh actress.

She was born in Cardiff to a Sierra Leonean mother and a Nigerian father.

Her heritage means she is Yoruba by descent, although she does not speak the language.

Who is Rakie married to?

Adam has starred in The Bill, Hustle, Casualty, Silent Witness, Marple and Lewis.

Who plays Alison Vosper in Grace? Does she have children?

Rakie and Adam have two daughters.

She filmed Sahara opposite Penelope Cruz whilst pregnant with her first child.

Their first daughter, Tansy, was born in July 2004.

In October 2008, Rakie announced that she would be departing Holby City in order to have a second child.

She said at the time: “I’ve had a great time and I’ll miss it.

“I made the decision purely because I was pregnant, but I wasn’t really ready to put down the character of Kyla.

Grace airs on ITV1 on Sunday March 14 2021 at 8pm. The second film Looking Good Dead will air later this year.