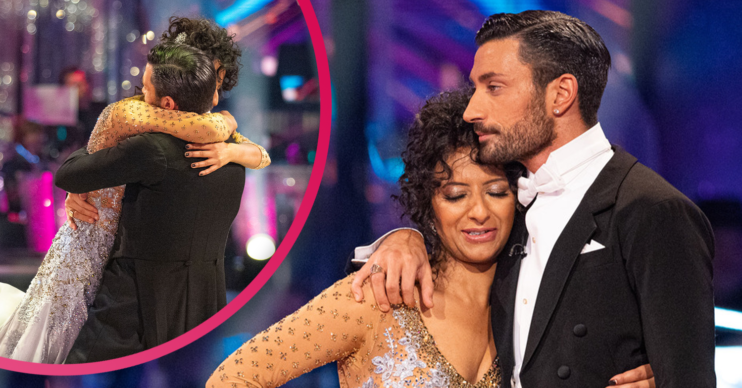 Who left Strictly? Viewers are ‘gutted’ as Ranvir Singh and Giovanni Pernice exit the show

The rumoured lovebirds are out of the competition

BBC viewers are “gutted” over who left Strictly tonight (December 13).

Good Morning Britain presenter Ranvir Singh and her pro partner Giovanni Pernice were given the boot just a week before the series finale.

And Brits have taken to Twitter to reveal their upset that they’ll no longer see the couple – who are rumoured to be lovebirds – on our screens.

Ranvir and Giovanni exited Strictly Come Dancing as a result of landing themselves in the bottom two.

As such, they performed in the dance off alongside Jamie Laing and Karen Hauer.

After the bottom two performed for the judges, the trio revealed who they would be saving.

Craig Revel Horwood opted to save Jamie and Karen after being wowed by their dance-off salsa.

Ranvir and Giovanni’s waltz impressed Motsi Mabuse, so she backed them to stay.

It was then down to head judge Shirley Ballas to make the final decision.

She opted to save Jamie, meaning Ranvir and Giovanni were sadly sent home.

What did fans say about the result?

Many believed that Ranvir was “robbed” of her place in the competition by Jamie, with many Twitter users wishing the Made In Chelsea star had left the competition instead.

One viewer tweeted: “Ranvir’s been robbed of her place in the final.”

“Absolutely gutted for @ranvir01 and @pernicegiovann1. They’ve been robbed,” another agreed.

Ranvir’s been robbed of her place in the final.

A third added: “The most disgraceful #strictly decision. WHAT JUST HAPPENED???”

The couple have been the subject of rumours since the start of the series, with many commenting that there’s more than just fancy footwork going on behind the scenes.

And Gio did little to dispel the rumours when he called Ranvir “baby” after they were voted off.

“Ummmm did he just call her baby?!” asked another.

So who is in the final?

Some fans were even predicting that the couple would announce their romance live during the final of the BBC One show.

However, now it seems it just isn’t meant to be.

Joining Jamie in the final will be Bill Bailey, HRVY and Maisie Smith.

Singer HRVY – who is partnered with Janette Manrara – is favourite to win.

The Strictly Come Dancing final airs on BBC One next Saturday (December 19) at 6pm.

Head to our Facebook page @EntertainmentDailyFix and tell us who you want to win the series.