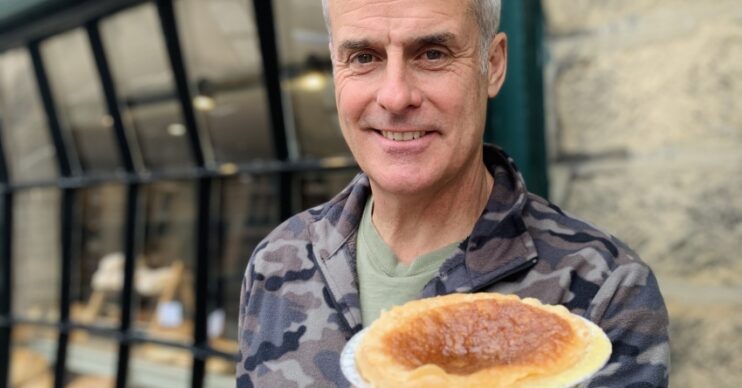 Who is This Morning chef Phil Vickery and where else have you seen him on TV?

From Michelin Star to on-screen star

This Morning chef Phil Vickery is a regular on the show as one of their resident chefs.

But did you know Phil has another pretty strong tie to the ITV programme? And having hailed from a non-showbiz background, how did he break into show business?

Who is Phil Vickery?

Phil Vickery was born in Folkenstone, Kent, in 1961.

With a talent for cooking, he worked his way up the kitchen ranks. Phil soon went from Commis chef in a hotel in his hometown, to Michelin Star Winner while he was the renowned Castle Hotel’s head chef.

Since then, Phil’s been on the receiving end of a number of awards, including Dessert Chef of the Year and Times’ Restaurant of the Year. Phil’s also crafted a very successful career in culinary journalism, with regular slots in the BBC Good Food Magazine and Sunday People Magazine to his name, amongst others.

Phil has also confidently dominated the daytime TV chef space, been a resident chef on BBC Radio 5 LIVE – if that’s not enough, he’s released no less than 20 cookbooks since 1999.

He’s done a lot for the Gluten-free community. Phil became a food ambassador for Coeliac UK in 2010, and his award-winning Gluten-free recipe books sell worldwide.

What others shows has Phil been on?

While most know Phil Vickery from his This Morning slots alongside Phillip Schofield and Holly Willoughby, his culinary skills have led to an expansive number of other programmes appearances under his belt.

Phil’s television career started off through a stroke of good luck: he was filling in for late celebrity cook Keith Floyd.

Since then, he’s appeared on BBC shows Ready, Steady, Cook (which changed his life significantly, but more on that later…), Holiday Programme and Ant and Dec’s Saturday Night Takeaway, to name but a few.

Phil began dating well-known TV presenter and author Fern Britton in 1999 after her split from her first husband.

They met on the set of Ready, Steady, Cook and went on to marry in spring 2000.

The pair were frequently seen together on the same set when Fern would host This Morning while Phil cooked up a delight.

They even teamed up to release their own cook book together in 2003, Phil and Fern’s Family Food.

However, they announced their split last year.

“After more than 20 years together Fern and I have decided to go our separate ways,” Phil said at the time in a Twitter statement that echoed Fern’s.

“We will always share a great friendship and our lovely children.”

Does Phil Vickery have children?

Fern also had three other children from her previous marriage.

Have you tried out any of Phil Vickery’s recipes? Let us know how they went on our Facebook page @EntertainmentDailyFix.