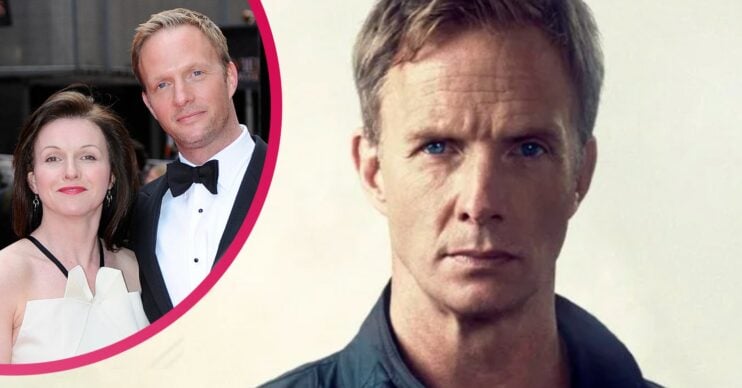 Rupert Penry-Jones: Who is Our House actor’s very famous wife and do they have kids?

Rupert Penry-Jones is back on our TV screens this week, when he appears in ITV1’s Our House – but who is his famous wife?

The actor is part of a showbiz power couple, and both have hugely successful careers.

So what else has Rupert Penry-Jones starred in, and how old is he?

Read more: Our House on ITV: When does it start, how many episodes is it and who’s in the cast?

Rupert Penry Jones wife – who is he married to?

Former model Rupert has been married to actress Dervla Kirwan since August 2007.

He wed the Irish actress following a three-year engagement.

They met in 2001 at a production of J. B. Priestley’s Dangerous Corner.

Speaking of his wife and leaving his playboy days in the past, Rupert has said: “Dervla started so many fundamental changes in my life, and there’s been no resistance from me.

“She’s just the right woman for me. She ‘gets’ me. I can be myself with her.”

Dervla was previously engaged to The Bay star Stephen Tompkinson.

Of course, she is well known for her roles in The Stranger, Ballykissangel, Goodnight Sweetheart, and Hearts and Bones.

Did he really date Kylie Minogue?

The pair dated in 1999 when they starred together in Shakespeare’s The Tempest in Barbados.

He has said: “I thought I was one of the luckiest men in the world.

“And to be honest I couldn’t believe it would last longer than a week. She’s an extremely free spirit.”

However, the relationship didn’t last long and Rupert admits he “wasn’t really into her music”.

This Morning presenter Holly Willoughby has also been very vocal about her crush on the actor – watch out Dervla!

Read more: The Drowning on Channel 5 is an unmissable thriller: Who’s in the cast? When does it start?

Do Rupert Penry-Jones and his wife have children?

The family live together in rural Hampshire.

Rupert says he is close to his kids and has made sure that no matter how much he is away from home, he won’t uproot them from home.

He explains it’s because he wants his children to have the kind of stable life he enjoyed when he was younger.

Rupert says: “I went to two schools growing up, a primary school and a secondary school, and want my kids to have the security of being at the same place.

“I don’t want them to be dragged around the world.

“Unless I’m in something very long term, it’s just a huge upheaval for the children.

“Dervla’s career is very much here at the moment, as well.

“For her to move to America would affect her career – it would be a gamble – and to expect everyone to move just because I’m out there would be selfish.

“So I’m just going to have to keep going backwards and forwards on a plane.”

However, he admits that when he is away from their Hampshire home, he thinks they have a blast with their mum.

He said: “My kids have become used to me going away and I think they enjoy it because Dervla lets them get away with a lot more than I do.”

Has Rupert Penry-Jones ever worked with wife Dervla Kirwin?

Rupert and Dervla have worked together, falling for each other during the production of a play 21 years ago.

“We met on an acting job, a play called Dangerous Corner,” Dervla told RSVP Magazine. “But most people meet their partners or friends through work so it was no different for me and Rupert.”

The former Ballykissangel actress says she thinks if they didn’t work in the same world, their marriage may not have lasted.

“Rupert totally gets it and we’re very supportive of each other, we always have been,” she said.

“I don’t think it would have worked out if I had married someone else.

“I don’t know any different, but all I can say is we’ve been together for 21 years and that speaks volumes.”

Does Rupert Penry-Jones have a brother?

The 45-year-old is best known for playing Crum in The Forsyte Saga, Adam Duke in Waking the Dead and Oliver Berg in Doctors.

Their parents are actors too.

His mother, Angela Thorne, played Marjory in To the Manor Born and Val Kirby in Noah’s Ark.

Rupert Penry-Jones wife – what has he starred in?

Rupert is probably best known for his performances as Adam Carter in Spooks, Clive Reader in Silk and DI Joseph Chandler in Whitechapel.

The actor has appeared on TV, in film and on stage during a three decade career.

Rupert recently starred in the superhero film The Batman, starring Robert Pattinson in the lead role.

In August 2020, the release of the first trailer for The Batman revealed that Rupert had an as-yet unannounced role in the film.

Rupert has recently starred as Mark in the Channel 5 thriller The Drowning, opposite Jill Halfpenny, and Luke in the film Getting to Know You.

Rupert joined the third series of Spooks in 2004 as Adam Henry Carter.

They wanted a character who had a MI6 background.

However, it took time for the audience to warm to Adam.

Rupert was aware that the initial fan reaction towards Adam Carter was negative “because Matthew [Macfadyen] was so successful and loved.”

Rupert Penry-Jones wife – why did he leave Spooks?

In his final episode, his character Adam Carter met an explosive end when he was blown up by a car bomb.

While Rupert says he doesn’t regret leaving the hit show, he says he would have liked to have appeared in the film version that starred Kit Harrington.

“I don’t regret leaving the show – though maybe I regret being dead so I couldn’t be in the movie!” he told Digital Spy.

“I think I’d had my time. You can stay on a show for too long – as much as I loved it and thought it was a great show. When I left, it was still going all guns blazing.”

Although Rupert Penry-Jones went on to appear in many more hit shows, he says he felt he was typecast as troubled spy Adam after four years on Spooks.

“It took years for me to be known as anything other than Adam Carter,” he confessed. “I think the longer you stay, the more years it takes to shake that [typecasting] off, and I needed to try and get other jobs.

“So I think career-wise, leaving Spooks was the right thing to do… But I didn’t know they were gonna make a movie!”

That said, he has admitted he hadn’t seen the big screen version or watched the rest of the series after he left, admitting: “It was too painful to watch it going on without me!”

Fans voted Adam’s death the fourth most shocking death scene in the series.

Hilary Rose from The Times noted that “the nation’s women duly went into mourning”, as a result of “pretty much every woman with a pulse seeming to fancy Rupert”.

How old is he and where is he from?

His brother, Laurence Penry-Jones, is an actor turned ambulance driver who is married to actress Line of Duty star Polly Walker.

Rupert was educated at Dulwich College in London until age 17, when he was enrolled at Bristol Old Vic Theatre School.

How tall is Rupert Penry-Jones?

While he is celebrated for being tall, blond and the epitome of Britishness, he has feared typecasting.

He has said: “What goes around comes around; sometimes tall blond chaps fall out of favour because everyone wants Scots or Liverpudlians or redheads and then, eventually, we come back in vogue again.

“One of the downsides of being typecast is that it makes you lazy, because you’re being constantly asked to do the same role, and it all becomes terribly easy.

“The way you keep yourself alive and interested as an actor is to stretch yourself and test yourself.

“That’s why actors become actors; they don’t want to be the same person every day.”

TV presenter Holly Willoughby has long spoken about her love of Rupert Penry-Jones and has been lucky enough to interview him several times on This Morning.

Over the years, Phillip Schofield has wickedly teased Holly about her infatuation with the actor and she has blushed almost every time he’s appeared.

On one particular episode in 2012, Phillip persuaded Holly – who is married to producer Dan Baldwin – to give Rupert a peck on the cheek at the end of the interview and told him as she did so: “You’ve made my day!”

“I mean that in the nicest possible way.

“I get to see the reality of him. She just gets to see the glossy glamour.”

“Why would I be intimidated?!”