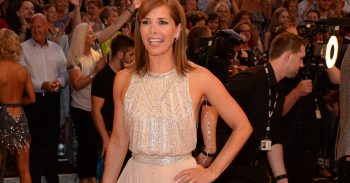 Who is replacing Darcey Bussell on Strictly Come Dancing?

There is a seat up for grabs on the BBC show

As ballet legend Darcey Bussell hangs up her judging paddles on Strictly Come Dancing, we take a look at who could be in the running to take her spot on the iconic judging panel.

Today, it was announced that 49-year-old Darcey is leaving the dance show after seven series.

Strictly announced the news on Twitter, writing: “After seven incredible series, Dame Darcey Bussell has decided to step down as judge from Strictly.”

Bookmakers Betfair have currently placed professional dancer Oti Mabuse as favourite with odds of 6/4 to be the new judge.

As well as being a popular member of the Strictly family among viewers, she also proved to be a very likable and fair judge on BBC show The Greatest Dancer

Who else could be in the frame?

Anton is one of the longest-serving dancers on the BBC show.

In 2017, the 52-year-old was reportedly tipped to replace head judge Len Goodman.

According to The Sun, he was invited to have screen tests for the role because of his “seniority” and the fact that “everyone loves” the dancer.

Dancer-turned-choreographer Arlene could be in with a strong chance of replacing Darcey, as she was on the Strictly judging panel from 2005 to 2009.

When asked who should replace judge Len Goodman in 2016, Arlene told the Press Association: “Me, of course”.

When on Loose Women later that year, the 73-year-old said she made that comment in jest, but she added: “I never made any secret of how much I loved doing that show.”

Original head judge Len Goodman left the show after the 2016 series. He had been on the Strictly since it started in 2004.

He had been splitting himself between Strictly and the US version of the show, Dancing With The Stars, and it became too much work for the now 74-year-old.

In 2017, Len admitted he missed being a judge on Strictly.

He said on Lorraine: “Course I’m missing it, there’s always a twang. I did it for 12 years!”

Diversity choreographer and dancer Ashley has become a huge face in the world of dance.

After winning Britain’s Got Talent with his dance crew in 2009, he went on to prove he has what it takes to sit on a panel.

The 30-year-old was a judge on Sky One’s Got To Dance for five series and since 2018 he has been on the panel of Dancing On Ice.

He promises to bring honesty as a judge. He said on Loose Women in 2017: “I’m going to be honest. If someone is great, I’ll tell them they’re great. If people need telling that it was bad, I’ll tell them.”

Could the most recent champion of the show be a contender for the judging seat?

Broadcaster Stacey, 32, wowed the nation with her performances with Kevin Clifton last series, before they were then handed the glitterball trophy.

Who would you like to see replace Darcey on Strictly? Leave us a comment on our Facebook page @EntertainmentDailyFix and let us know what you think.