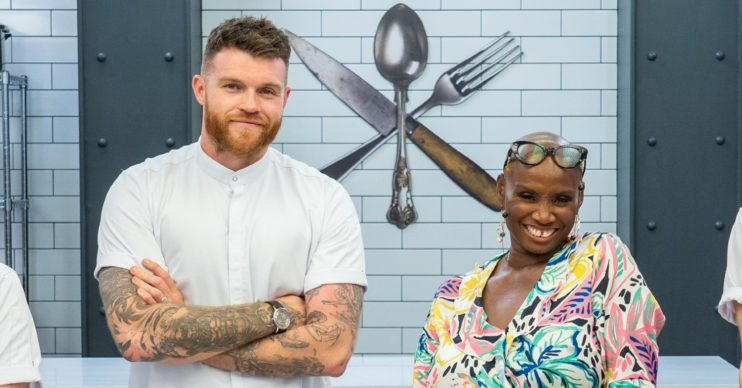 Who is chef Tom Brown? Where does Great British Menu guest work?

Great British Menu continues on Wednesday (March 31 2021) with chef Tom Brown appearing as judge in the Scottish heats – but who is Tom Brown?

Where does he work and does he have a Michelin star? And is he married (yes, he is rather handsome, isn’t he!)?

Here’s everything you need to know about Tom and his career.

Who is Tom Brown?

Tom Brown is a British chef who was a finalist on the Great British Menu in 2018.

He was born in Redruth, Cornwall.

In 2012, he was appointed as chef de partie at the St Enodoc Hotel, Wadebridge, Cornwall.

In 2016, he became a protégée of acclaimed chef Nathan Outlaw where he held the position as head chef at Outlaws restaurant.

As well as appearing on Great British Menu as a guest judge, he has also cooked on This Morning.

He made quite an impression on the morning show, with some viewers calling him “absolutely gorgeous”.

Phillip Schofield described Tom as the “Heston Blumenthal of the fish world”.

Where does Tom Brown work?

Tom now owns and is in charge of his own restaurant, Cornerstone.

Cornerstone is located in Hackney Wick.

The menu is inspired by the “spirit of sharing plates and is made of simple, but sophisticated, seafood dishes which change daily”.

The restaurant opened in April 2018, and has an open kitchen and marble-topped bar, where guests can sit and watch the chefs prepare their food.

Does he have a Michelin star?

Cornerstone restaurant was awarded one Michelin star in 2021.

He said the accolade was “the proudest moment of my career so far”.

The chef celebrated with a tattoo to add to his already extensive collection of body art.

Sharing a photo of his new inking – a star on his arm – Tom wrote on Instagram: “Michelin star y’all.

“The proudest moment of my career so far, but I genuinely can’t take the credit for this.

“It’s all down to my incredible staff who give so much and work so hard every day, thank you so much.

“Also to @nathanoutlaw for the training, love and support, without the things I learnt from him this would never have been possible.”

How old is Tom Brown?

He is currently 33 years old.

Is Tom Brown married or single?

They wed in December 2020 after five months together.

At the time, she told her social media followers: “I met a guy in July, decided to find a house together in August, then proposed to him in bed eating pizza in September and we are finally getting hitched in three days time.”

Veteran chef and Michelin-starred Tom Brown, a seafood specialist, tastes their canapés, which range from a cheese tart to a duck liver parfait.

Are you enjoying Great British Menu on BBC Two? Leave us a comment on our Facebook page @EntertainmentDailyFix.