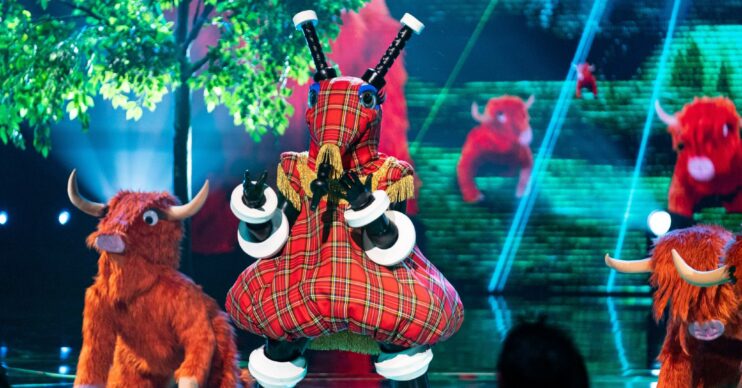 Bagpipes rocked the studio during their performance on The Masked Singer last weekend.

However, fans think they have already worked out who the mysterious celebrity is.

Here is everything we know.

During their VT, Bagpipes fed the audience clues as they tried to work out who is hidden under the mask.

Bagpipes included lots of references to tennis for example: tennis balls and rackets were hidden around the castle.

They also mentioned: “I’m no stranger to an instrument.”

For their final clue they revealed to the panel: “I played a wee tune with a tumbling rock.”

Viewers speculated who the masked celebrity is and they believe it’s a music icon.

Fans are convinced that AC/DC legend Angus Young is the man behind the mask.

One fan wrote: “I reckon Bagpipe is Angus Young from AC/DC #maskedsinger.”

Another tweet read: “#TheMaskedSinger very confident that the Bagpipes is Angus Young from AC/DC.”

One said: “Bagpipes is deffo Angus Young from AC/DC.”

Read more: Joel Dommett admits he can’t leave home when The Masked Singer is on air

Fans also believe that Bagpipes could be David Tennant putting on a ‘rubbish’ Scottish accent.

Someone tweeted: “Gotta be David Tennant.”

Another person said: “Sounds like David Tennant in the VT trying to put us off with a rubbish Scottish accent.”

What do The Masked Singer judges think?

During their lively rendition of Song 2 by Blur, Bagpipes had the whole panel on their feet.

The judges were then made to guess who they think the celebrity behind the tartan mask could be.

Rita Ora made the first guess and wondered that it might be famous actor Richard Madden.

Jonathan Ross and Mo Gilligan also joked that it might be Paul Hollywood or Andy Murray’s mum.

However, Davina McCall spotted all of the tennis references in VT and guessed John McEnroe.

John McEnroe is an American tennis player who is also in a band called The Johnny Smyth Band.

After Bagpipes revealed their final clue, Jonathan also spotted that “tumbling rocks” could be a reference to The Rolling Stones and suggested that John McEnroe could have had something to do with them.

Who do you think Bagpipes is? Head to our Facebook page @EntertainmentDailyFix and let us know.