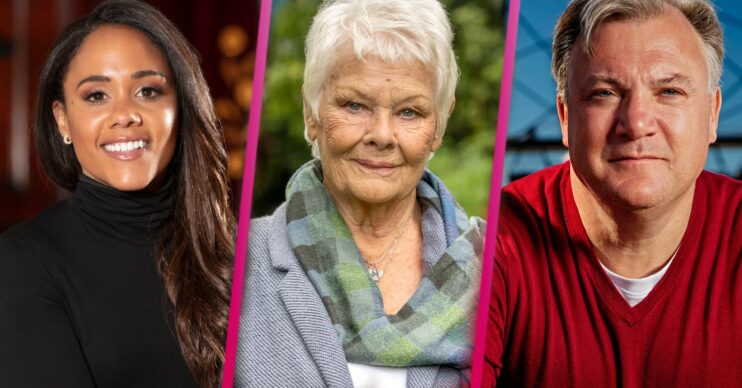 Who Do You Think You Are? Meet the new participants of series 18 – including Alex Scott, Dame Judi Dench and Ed Balls

Who Do You Think You Are? is one of our favourite shows, and the genealogy series is back for a new run this autumn.

And now we know who’s going to take part.

So who’s in this series? Here’s everything you need to know…

Who Do You Think You Are? – who’s in the new series?

Eighty-six-year-old Dame Judi is an acting legend and she needs no real introduction.

We’ll give her one anyway.

From Shakespeare and sitcoms to James Bond, Dame Judi one of our national treasures.

And, in Who Do You Think You Are?, we’re promised some intriguing connections to the Bard himself… and some Danish heritage.

Could we be talking Hamlet here?

Thanks to his hilarious appearance on Strictly in 2016, and his moving series win in BBC One’s Celebrity Best Home Cook, it’s easy to forget that Ed was once at the forefront of British politics.

Ed also served as Shadow Chancellor Of The Exchequer for four years between 2011 and 2015.

Married to Labour MP Yvette Cooper together they share three children, in Who Do You Think You Are? Ed is set to reveal some ancestral bravery.

Pop superstar Pixie, 30, is the next cab off the rank.

We’re told that the singer will uncover musical roots that go back three generations.

Comedian Joe is now a household name thanks to his presenting job on The Great British Sewing Bee and Joe Lycett’s Got Your Back on Channel 4.

Add in appearances on Steph’s Packed Lunch and panel shows, Joe’s star has definitely risen the past few years.

However, Joe will find a darker family history in Who Do You Think You Are?

Another whose star has risen dramatically over the past two or three years is former England football star Alex.

However, the 36-year-old will find out more about her family – their role in the war against fascism in the 1930s and life in Jamaica.

The social media star became a big name on YouTube and then endeared himself to many thanks to his appearance on Strictly in 2018.

He also met now-fiancée Dianne Buswell on the dancefloor and even tried his hand at acting in BBC One’s The Syndicate.

Comedian Josh, 38, is known for his appearances on Channel 4’s The Last Leg.

However, lest we forget, he also starred in his own BBC sitcom, Josh.

Read more: Is Alex Scott single? Who has the Soccer Aid star been linked to?

In Who Do You Think You Are? we’re teased that Josh will find out his ancestors were nobility in Elizabeth I’s Tudor court!

Look out for the new series next month.

Alex Scott Ed Balls Joe Lycett Pixie Lott Who Do You Think You Are?