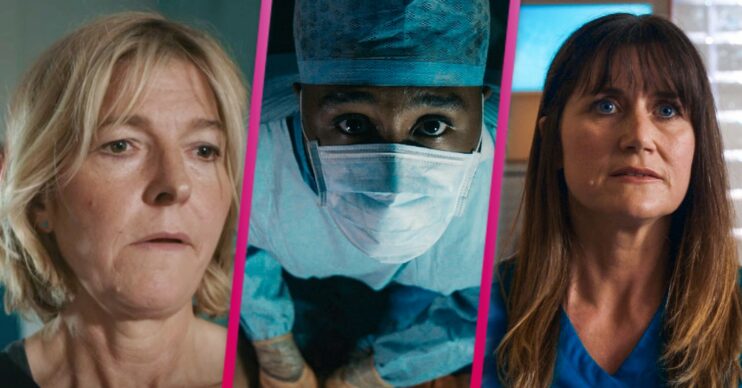 Is this who dies in tonight’s episode of Holby City?

In last week’s episode of Holby City (Tuesday, September 7 2021), Cameron Dunn told Bernie and Hanssen he had planted a bomb in the hospital.

As Hanssen began to evacuate, Ange was taken in for an emergency caesarean after her transfusion procedure for the twins went wrong.

Meanwhile in the hospital, Lucky discovered Jeni’s secret after going through her desk.

The explosion went off leaving fans wondering, will someone die, and if so, who?

A new trailer released after the episode shows what’s to come.

Here are eight Holby characters that could be in serious danger.

Ange was having a life-saving transfusion on one of her babies, who wasn’t growing properly.

However during the procedure something went wrong and Ange lost consciousness and it looked like they would need to deliver the twins.

Soon the explosion went off. In the new trailer it looks like Chloe and Josh will have to deliver the twins in the hospital.

Will Ange and her babies survive?

At the end of the episode, Henrik could be seen lying on the floor after the episode.

After discovering Cameron planted a bomb, he began trying to evacuate all the wards to get his colleagues to safety, but he ended up getting caught up in the explosion.

Josh was also caught up in the explosion.

While the trailer reveals he is alive after the explosion, he is also in the hospital and needs to deliver his twins.

Will he make it out alive?

Ange’s daughter Chloe was determined to save her mum.

Like Josh, the trailer reveals she appears to be okay after the explosion, but they’re not out of danger just yet.

Will they be able to deliver the babies safely?

Cameron is the one who put the bomb in the explosion, telling his mum he didn’t plan to go back to prison, but intended to die.

Bernie is determined to help her son and get him out, will he make it?

Bernie was also caught up in the hospital explosion.

Despite everything Cameron had done, Bernie opted to stay by her son’s side.

Will Bernie make it out of the hospital alive?

In last night’s scenes, Lucky grew even more suspicious of Jeni, however she had the wrong end of the stick, thinking Jeni had been taking money from the hospital.

She wanted help from Evie, who she suspected knew something about Jeni.

While she didn’t tell her what had been happening, she pointed Lucky in the direction of Jeni’s top desk drawer.

Lucky went through Jeni’s drawer and discovered a number of young girls’ passports.

As she started to piece everything together, Jeni walked in.

As Jeni realised Lucky knew her secret, Jeni smacked her over the head with a glass paperweight.

Moments later the explosion went off. Will she survive?

Holby City airs Tuesday at 7.50pm on BBC One.

Who do you think will die? Leave us a comment on our Facebook page @EntertainmentDailyFix and let us know what you think of this story.