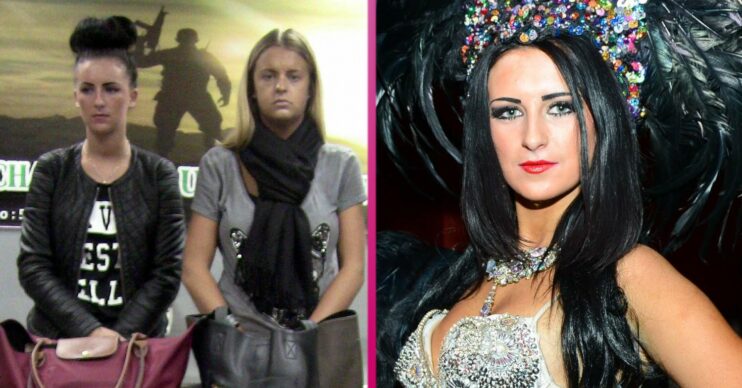 Who are the Peru Two, what happened to them and where are Michaella McCollum and Melissa Reid now?

Their shocking story made headlines and is the focus of High: Confessions of an Ibiza Drug Mule

In 2013, Michaella McCollum and Melissa Reid were caught with 11kg of cocaine in Lima airport and became known as the Peru Two.

Michaella tells her side of the story in the BBC documentary High: Confessions of an Ibiza Drug Mule.

So why did she do it and what has happened since to Michaella McCollum and Melissa Reid?

In 2013, Michaella McCollom and Melissa Reid were caught attempting to smuggle 11kg of cocaine out of Lima.

The pair were caught with £1.5m of cocaine after becoming drug mules for a cartel.

The Peru Two were 20 year old Michaella from Dungannon, Northern Ireland, and Melissa from Lenzie, Scotland.

They were arrested on August 06 2013 on suspicion of drug smuggling at Jorge Chávez International Airport, Lima, Peru.

They initially claimed they had been coerced by an armed gang.

However, they subsequently pleaded guilty and admitted they’d been offered £5,000 payment.

On 17 December 2013, the pair were sentenced to six years and eight months imprisonment in the Ancón 2 prison.

In early 2016, both women sought to return to the United Kingdom.

Michaela McCollum applied to be freed on parole and was released on 31 March 2016.

Melissa Reid was released from prison on 21 June and immediately returned to Britain.

The women received extensive press coverage in Peru, the United Kingdom and the Republic of Ireland.

They were featured on the Channel 4 documentary Brits Behind Bars: Cocaine Smugglers, which aired on 10 October 2015, and detailed how drug mules are trained.

Michaella McCollum Peru Two: What has she said? Why did they do it?

Michaella McCollum formed a relationship with a drug trafficker during her first trip abroad in Ibiza.

He persuaded her to assist him in smuggling drugs for his cartel contacts.

Just a few weeks later, she was arrested at Lima airport in Peru with more than a million pounds worth of cocaine in her suitcase.

Since her release from jail, Michaella has written a book about her experiences called You’ll Never See Daylight Again.

She has also appeared on Good Morning Britain and various TV shows to talk about her experiences and warn others.

Talking in the BBC One documentary – which originally aired on BBC Three – she says: “When people ask how I feel about it now, it feels like I’m thinking about a different person.

“I can’t relate to that person now.

“How was I like that? I just accepted things I didn’t feel comfortable with, but felt too shy to say anything about.

“Those three years in prison did so much to make me the person I am now, with the mindset and morals I have now.”

She has also said she’s changed since becoming a parent, and used drugs as an escape when she was younger.

She admits she was high on drugs when she agreed to smuggle cocaine.

Michaella and Melissa hadn’t known each other prior to being paired up by the criminals arranging the cocaine’s journey.

In 2016, both women were granted early release.

Since then, Michaella has been vocal about her story, and insist she’s changed since she became known as one half of the Peru Two.

Michaella, now 28, is a mother of three-year-old twin boys Rafael and Rio and lives in Northern Ireland.

She has tried to reinvent herself as a model, author and celebrity – she even has a management company for ‘business enquiries’.

She regularly shares glamorous photos of herself with her near-40,000 followers on Instagram.

In High: Confessions of an Ibiza Drug Mule she narrates her journey into and out of crime.

She has also written a book about her experiences.

Since the pair’s release in 2016, Melissa has lead a comparatively quiet life.

Melissa, 27, is single after recently splitting up from the backpacker boyfriend Gary Stafford who visited her in jail.

She lives in Kirkintilloch, near Glasgow in Scotland, with her dog.

After her return to Scotland, Melissa confessed she had been on a “downward spiral” of ecstasy, cocaine and ketamine in Spain.

High: Confessions of an Ibiza Drug Mule on BBC One

This is the story of how Michaella McCollum tried to smuggle £1.5m of cocaine through Lima airport and failed.

Michaella was a teenager from Northern Ireland who formed a relationship with a drug trafficker during her first trip abroad in Ibiza.

He persuaded her to assist him in smuggling drugs for his cartel contacts.

Just a few weeks later, she was arrested at Lima airport in Peru with more than a million pounds worth of cocaine in her suitcase.

Here, she tells the story of how a regular teenager from rural Northern Ireland came to be working as an international drugs mule.