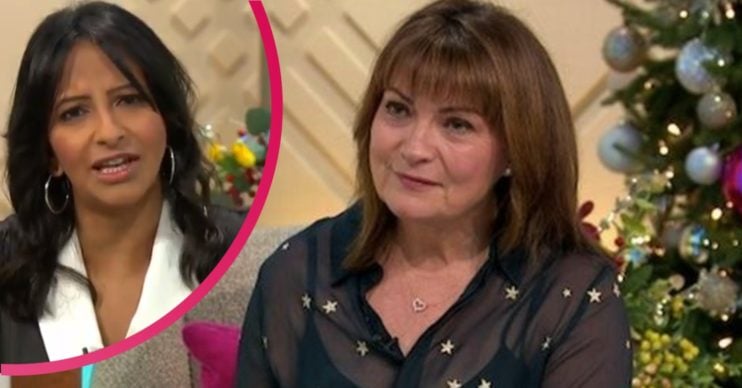 The ITV star's usual cover, Christine Lampard, was nowhere to be seen

Lorraine Kelly has stepped away from her show this week so she can spend some time with her family over Christmas.

The Scottish presenter usually asks TV host Christine Lampard to step in, however, there’s been a big change this week.

Where is Lorraine Kelly today?

Some of the viewers who tuned into Lorraine on Monday (December 21) were shocked to not see the loveable host in her usual seat.

In the run up to Christmas, Lorraine decided to take a well-earned break.

As a result, she asked Strictly star Ranvir Singh to step into the role for her on Monday, Tuesday and Wednesday.

What did Lorraine and Ranvir say?

Last week, Ranvir confirmed she would be taking over the show for a few days.

Lorraine teased that although she’s taking time off, she will be eagerly watching from her sofa.

“I shall be at home with a cup of tea, watching my Ranvir, you betcha,” said Lorraine.

Ranvir joked: “Oh I better not mess it up then, the boss is watching!”

What did viewers think about Ranvir Singh on Lorraine?

Viewers rushed to social media to share their thoughts on Ranvir taking over for the week.

One fan tweeted: “Ranvir is actually an amazing presenter wow I love her #lorraine”.

“Woohoo putting her stamp on #lorraine … mon to wed this week,” tweeted a second enthusiastic viewer.

Aha @ranvir01 is killing it on #Lorraine you go gurrrrl 👌👌 pic.twitter.com/9LffKluPzk

While a third added: “Loving watching my chum @ranvir01 sitting in for @reallorraine doing a cracking job as ever #LORRAINE”.

However, not every viewer was happy about the change.

“Why is Ranvir shouting? #Lorraine,” questioned one fan.

“#Lorraine Thought it might be better without Lorraine but I was wrong same old stupid questions!” ranted a second.

While a third added: “Why is she STILL talking about Strictly?! She lost!”

Did you enjoy watching Ranvir on Lorraine? Leave us a comment on our Facebook page @EntertainmentDailyFix and let us know.