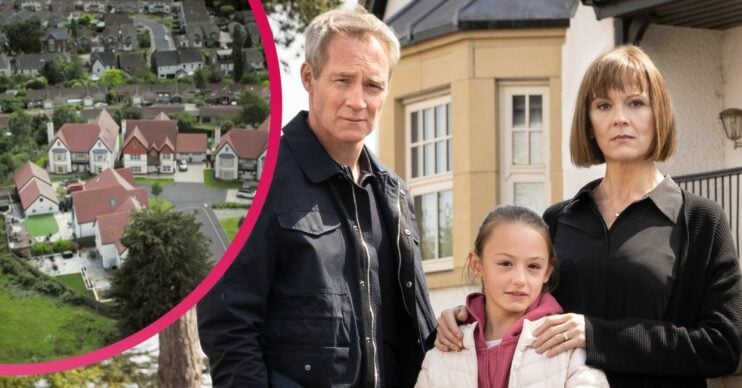 Hollington Drive on ITV1 is currently keeping viewers guessing about who killed Alex Boyd – but we also want to know where is it filmed?

The four-part drama follows the residents of a very luxurious-looking street when one of them turns up dead.

Despite the veneer of wealth and idyllic family harmony, there’s a hotbed of secrets and lies.

But is Hollington Drive a real street and, if so, where is it?

Where is Hollington Drive filmed?

Hollington Drive viewers love the beautiful estate which is at the heart of the show.

Theresa and Helen live in an unnamed region of the UK, but the ITV series is actually filmed in Wales.

Several iconic locations have featured in the show, including Hang Fire Southern Kitchen, in Barry.

They also shot scenes at the nearby Sanatorium Park, Canton.

Is it a real street?

The real life Hollington Drive is located a few miles outside Cardiff.

The picture-perfect suburban street is located on a housing estate in Cardiff called The Mill.

The estate features large houses and leafy surroundings, and was built just a few years ago.

The production team used the inside of several houses on the estate.

Some residents moved out, while others stayed in their homes and were able to watch the filming take place.

Speaking about the show’s location, writer Sophie Petzal said: “I always had a very clear picture in my head of what this street would look like.

“I wanted something that felt bright, without being too cartoony or silly.

“I wanted it to juxtapose with the dark underbelly of the story, with detached houses that looked really nice and idyllic but not recognisably from a specific part of Britain like Manchester or Bristol.”

She continued: “It has white houses that look comfortable and aspirational.

“Overall, it feels compelling and inviting, even though the subject matter is dark and kind of twisted.”

Where is Hollington Drive filmed? How much do houses cost there?

The houses featured on Hollington Drive look rather pricey, but there’s a whole range of houses on the estate that range from one bedroom to four.

Developers describe The Mill as “a prime location with easy pedestrian and bus access to Cardiff city centre”.

The community has easy access to parks, Cardiff City football stadium, Canton shopping area with its shops, pubs, restaurants, banks and much more.

Episode three of Hollington Drive airs on Wednesday October 13 2021 at 9pm on ITV1. Episode one is available to watch on the ITV Hub.