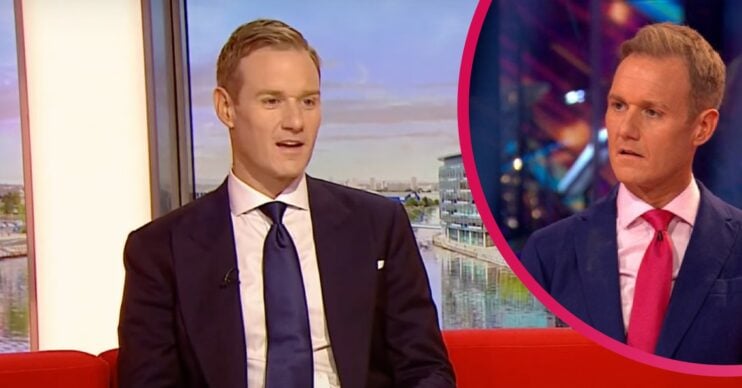 Where is Dan Walker? Presenter hits back at rumours he’s quit BBC Breakfast after absence

Where is Dan Walker?

Many BBC Breakfast viewers are asking where is Dan Walker this week following his absence from the show.

Now Dan has addressed speculation that he’s quit BBC Breakfast after fans wondered where he was.

The 44-year-old took to Twitter this morning (Wednesday, January 5) to set the story straight.

Where is Dan Walker on BBC Breakfast?

Just so you know… I haven’t left #BBCBreakfast, I haven’t ‘taken some time out after Strictly’ and there hasn’t been a ‘major presenter shake-up’ 😂😂😂
I’m just not in this week.

Dan, who hosts BBC Breakfast Mondays through Wednesdays, was nowhere to be seen when the show returned to screens after the bank holiday weekend.

His co-host, Sally Nugent, was joined by Ben Thompson instead. And today, Dan was replaced on the famous red sofa again, this time by Jon Kay.

Dan’s continued absence from the show he’s been hosting since 2016 has led to many viewers asking – where is Dan Walker? Some have even speculated that the 44-year-old has quit BBC Breakfast for good following his stint dancing on Strictly.

However, that isn’t the case, as Dan himself said in a tweet this morning to his 744.4k followers.

“Just so you know… I haven’t left #BBCBreakfast, I haven’t ‘taken some time out after Strictly’ and there hasn’t been a ‘major presenter shake-up’,” he tweeted.

Many of Dan’s followers replied to his tweet with relief knowing that he hadn’t quit and wished the presenter well during his break from the show.

“Are you allowed holidays? Shock horror,” one viewer joked. “Enjoy your break.”

“Breaking news.. Dan Walker is off on holidays (like plenty of other people this week) enjoy your well deserved rest. I’m just glad it’s not due to Covid and you can enjoy your time off fully,” another tweeted.

“How very dare you take time away with your loved ones thus leaving the UK bereft with your absence on the big red sofa! Enjoy your time off,” a third said.

“How dare you take time off without the express permission of the general public and the press!!” another joked.

What else has happened to Dan Walker?

Dan’s tweet follows on from his one yesterday (Tuesday, January 4), where he joked that he didn’t realise BBC Breakfast was back on TV.

Yesterday morning, Sally Nugent posted a picture of herself and Ben Thompson on the red sofa. Dan then took the opportunity to have a little fun.

“What? You told me #bbcbreakfast wasn’t on this week and that you were ‘in the Maldives’,” he joked.

Yesterday also saw Morning Live host Gethin Jones poke fun at Dan as he took a swipe at the presenter’s time on Strictly. Dan’s dance partner, Nadiya Bychkova, was a guest on the show.

When asked whether she saw her little girl at Christmas, Nadiya said: “Yes, we spent Christmas with Mila together which was beautiful, I mean – that’s family time now. Loved it.”

Gethin then took the opportunity to take a cheeky swipe at Dan.

“And you needed a couple of weeks off, after getting over dancing with Dan Walker for 10 weeks!” he joked.

Are you missing Dan on BBC Breakfast? Leave us a comment on our Facebook page @EntertainmentDailyFix and let us know!