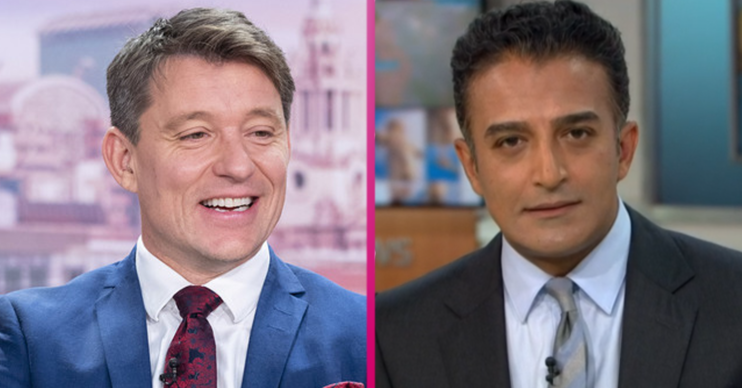 GMB fans woke up expecting to Ben Shephard on their screens this morning (August 6).

But instead, they switched the telly on to find Adil Ray co-hosting Good Morning Britain with Ranvir Singh.

So where is Ben Shephard?

Where is Ben Shephard?

Ben is taking some time out from GMB hosting duties.

His pal Kate Garraway revealed on the show yesterday that it was final day fronting the programme for some time.

“This is Ben’s last day,” she said. “You’re going and having a bit of time off aren’t you?”

Ben then explained that he was having some time off to film the new series of Tipping Point.

“I’m not having any time off at all – it’s peak Tipping Point season,” he said.

“Don’t think I’m going to be sat with my trotters up down in the south of France.”

Ben is expected to return to Good Morning Britain in the autumn.

Piers Morgan and Susanna Reid are usually the main presenters of GMB.

However, the duo, alongside Dr Hilary Jones, have the entire summer off and aren’t expected to return until September.

With that in mind, it’s all change in the ITV studios for the other presenters.

Who is Adil Ray?

Adil Ray is a British TV host, actor and comedian.

Fans may recognise the 46-year-old from. the hilarious BBC series Citizen Khan which he stars in and co-writes.

Talking about the series, he told the BBC: “Growing up in a Muslim family in the 1970’s and 80’s I rarely saw families like ours on TV.

“So I’m pleased to be able to put that right and share a bit of my culture with a wide audience. It was very important that the production team and I worked closely together to make this authentic.

“From the style of the Khan’s carpet to the Muslim artefacts on the wall, it has to feel and look like a Pakistani Muslim home. ”

Adil’s net worth is set between $1 – 5 million, according to Trend Celebs Now.

The star first hosted Good Morning Britain as a stand-in back in 2018.

Since then, he’s regularly been asked back to fill in for Piers and Ben.

What have GMB fans said?

Adil has divided those tuning into Good Morning Britain at home.

Some are loving seeing the funnyman fronting the show once more and have been quick to take to Twitter.

One wrote: “Good to see you both back #adilray and #ranvir01.”

Another then tweeted: “Two of my favourite Good Morning Britain presenters Adil Ray and Ranveer Singh on the show today.

“If Kate Garraway shows up, I will be a happy chap. #goodmorningbritain.”

But others aren’t so keen to see Adil filling in for Piers and Ben: “Looks like I will have to wait until Monday to watch GMB . Can’t stand Adil Ray.”

Who is your favourite GMB presenter? Visit our Facebook page @EntertainmentDailyFix and let us know what you think of this story.