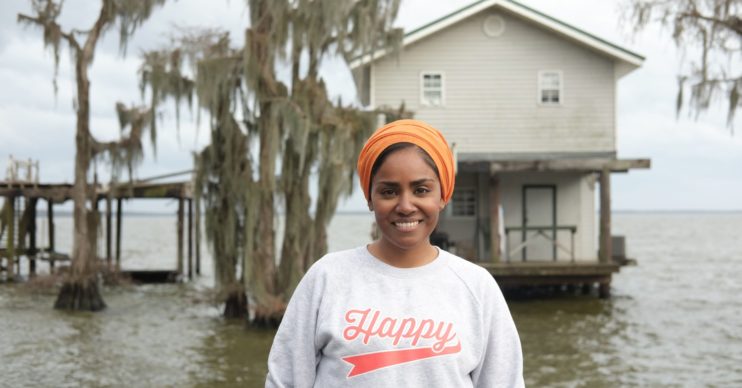 When was Hurricane Katrina? How many people died?

Nadiya Hussain travels to New Orleans, a city flooded by the natural disaster

On Thursday night (December 10 2020), Nadiya Hussain travels to the US in Nadiya’s American Adventure.

She sees first hand the destruction caused by the hurricane.

When was Hurricane Katrina?

The Atlantic hurricane hit in August 2005.

The hurricane particularly affected the city of New Orleans and the surrounding areas.

Katrina claimed many lives and left behind a ruined landscape.

It started as a tropical depression from the merger of a tropical wave and the remnants of Tropical Depression Ten.

Early the following day, the depression intensified into a tropical storm.

It headed westward toward Florida.

Katrina strengthened into a hurricane two hours before making landfall at Hallandale Beach on August 25.

It briefly weakening to tropical storm strength over southern Florida.

Hurricane Katrina emerged into the Gulf of Mexico on August 26 and began to rapidly intensify.

Hurricane Katrina was the third strongest hurricane ever recorded to make landfall in the US.

In New Orleans, Katrina peaked at a Category 5 hurricane, with winds up to 175 mph.

Read more: Woman who was held captive by her own father for 30 years says she forgives him

How many people died in Hurricane Katrina?

More than 1,800 people died in the natural disaster.

According to the National Hurricane Center, 1,836 people lost their lives as a result of Hurricane Katrina.

Eighty six per cent of Katrina deaths occurred in New Orleans, with the elderly most affected.

Cause of death was drowning, or acute and chronic diseases.

Seven hundred and five people are still reported missing as a result of Hurricane Katrina.

What are the world’s worst hurricanes?

It predates modern storm-tracking technology, but it is widely accepted to be the deadliest storm in history.

It devastated Barbados, Martinique, St. Lucia and the rest of the Caribbean.

It predominantly affected Nicaragua and Honduras in 1998.

The 15-foot storm surge wiped out the city.

Fifi was responsible for 8,000 deaths. The catastrophic storm struck Central America in 1974.

Flora struck in 1963 sweeping through Tobago, the Dominican Republic and Haiti. It caused 7,000 deaths.

Jeanne, responsible for 3,000 deaths in 2004, caused devastation in the Caribbean and the East Coast of the United States.

David, death toll 2,000 in 1979, struck both the Dominican Republic and the East Coast of the United States.

Sandy killed 186 in 2012, wreaking havoc in Cuba, Haiti and Jamaica, as well as New Jersey and New York.

Why do hurricanes have names?

Scientists name tropical storms like hurricanes, cyclones or typhoons to keep track of them.

They used to be tracked by the year they happened.

Names make them much easier for experts to tell them apart.

What is Nadiya’s American Adventure about?

The chef travels to America in this two-parter, starting with Louisiana and New Orleans.

She meets a man who responded to Katrina by setting up the area’s only grocery store.

He spent his life savings on the store, which is also a hairdressers, launderette and soul food cafe.

Nadiya’s American Adventure airs on Thursday December 10 at 8pm on BBC One.

Will you be tuning in to Nadiya’s American Adventures? Leave us a comment on our Facebook page @EntertainmentDailyFix.