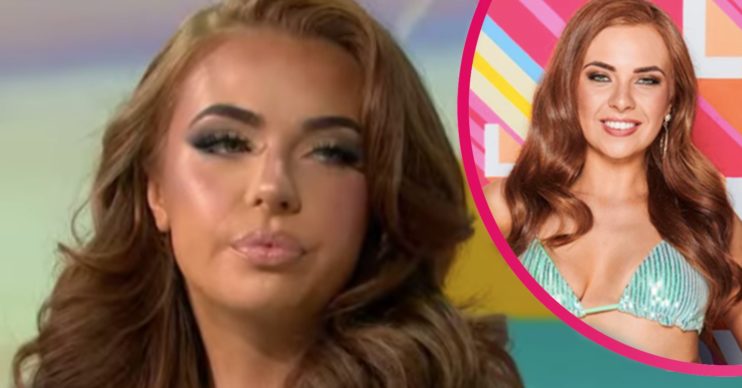 She's been targeted by vile trolls...

Demi Jones is a former Love Island star who recently revealed she has been diagnosed with cancer.

The reality star is remaining hopeful as she battles the illness.

But she has delivered a heartbreaking update on how trolls have responded to her ordeal.

Here we take a look at Demi’s time on Love Island, her cancer battle and how how she is rising above online abuse…

How old is Demi Jones?

When was Demi Jones on Love Island?

Demi appeared on series five of Love Island in 2020.

This was the first Winter Love Island series, which was filmed at a luxury villa in Cape Town, South Africa.

Demi arrived on the ITV series on day 16 as a bombshell.

She made it to the final day – day 44 – but finished in third place with Luke Mabbott.

What happened between Demi and Luke on Love Island?

However, they split up just a few months after the show ended.

Why did Demi and Luke split up?

Demi addressed her viewers with: “We were all happy, we came out the villa, we came third which was amazing. We had two weeks of freedom and then COVID-19 happened and we were pushed into lockdown. I live right down south and he lives really up north, so I already knew that was going to be a problem.

“To cut a long story short, over lockdown I was getting left on read quite frequently, I knew in my heart something wasn’t right. I knew my own worth, I stopped replying to him as well. All of a sudden he rung me out the blue and said ‘I need to end it and I need to end it now’ it was quite sudden.”

Luke has since moved on with another former Love Island contestant – Lucie Donlan.

He also claimed his relationship with Demi was staged.

He says they broke up weeks before Demi claimed on her YouTube video.

Addressing his fans on Instagram he claimed she asked him to “wait three weeks for my clothing brand to launch so I can get publicity round it”.

What kind of cancer does Demi Jones have?

Demi has been diagnosed with thyroid cancer.

Taking to Instagram, she revealed: “Hi guys, I got my results today and unfortunately I have thyroid cancer.”

She added: “The tumour has been removed but I’m now due to have more surgery to remove the rest of my thyroid.”

What has the Love Island star said about her cancer battle?

Demi said that she believes her cancer is slow growing and is remaining optimistic about a full recovery.

“My doctor reckons that I’ve had this for years and years and had no idea.

“I’ve had this lump since 2019 since I noticed it but hadn’t come out. So it’s probably been underlying for years and years.”

Meanwhile, she vowed to overcome the disease on Instagram.

She told her followers: “I’ll get over this and I’ll definitely be fine, but it’s just that I know I have to make this trip now.”

During Demi’s GMB interview she tragically revealed that trolls have accused her of faking having cancer.

She explained: “Even with my cancer, there were still nasty comments and things like that.”

The star added: “Saying, ‘Oh, she’s lying, she’s that’. And I just woke up and looked at Instagram and thought, ‘That’s ridiculous.'”