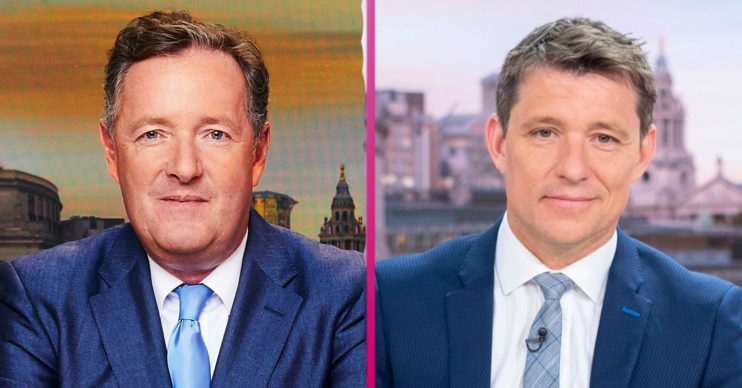 When is Piers Morgan back on GMB? Good Morning Britain presenter replaced by Ben Shephard

The star and his co-host Susanna Reid have been replaced boy Ben Shephard and Kate Garraway on today’ show (July 27).

And viewers have been reacting to their absence on Twitter.

So when is Piers Morgan back on Good Morning Britain?

Piers will return to Good Morning Britain in early September.

Every year, he, Susanna and Dr Hilary Jones all take an extended break over the summer.

Lorraine Kelly is also enjoying some time off over the next couple of months.

He explained to viewers at the time that he and Susanna would be taking some time out.

Opening the show, Piers told viewers: “This is it – our last morning until September!

“The programme will continue powering away through the summer but we have hit the wall.

“We are going away to lie in the sunshine.

“We won’t be enjoying the sun together, those days are long gone sadly. I miss those days when we used to enjoy each other’s company.”

What have GMB viewers said?

And they’ve been very vocal with their demands on Twitter.

One wrote: “Hey Piers, I wish you were back on GMB asking the politicians about a fair pay rise for ALL NHS staff. Nurses have been stabbed in the back AGAIN.”

Another added: “@piersmorgan when are you back on GMB I can get through this pandemic without you.”

Moments later, a third tweeted: “Can’t wait till you are back on GMB it is not the same when you are not on.”

Shortly after, a fourth posted: “@piersmorgan when are you back on Gmb it’s so boring with out you on there.”

The reaction may come as a shock to Piers as viewers were petitioning to get him sacked earlier this year.

Where is Piers Morgan?

Piers is currently on holiday in the south of France with his family.

Ahead of his flight, he shared a snap of himself on Instagram with the caption: “I’m a washed up, knackered pathetic excuse for a celebrity… get me outta here.

Unfortunately, it hasn’t been the best break for Piers as he’s suffered an injury.

Taking to Instagram on Monday (July 20), he revealed he’d hurt his leg.

He captioned an image showing him using crutches: “Peg-leg.

“(Nothing like tearing a tendon on Day two of a six-week holiday)”.

Are you missing Piers Morgan on GMB? Visit our Facebook page @EntertainmentDailyFix and let us know what you think of this story.