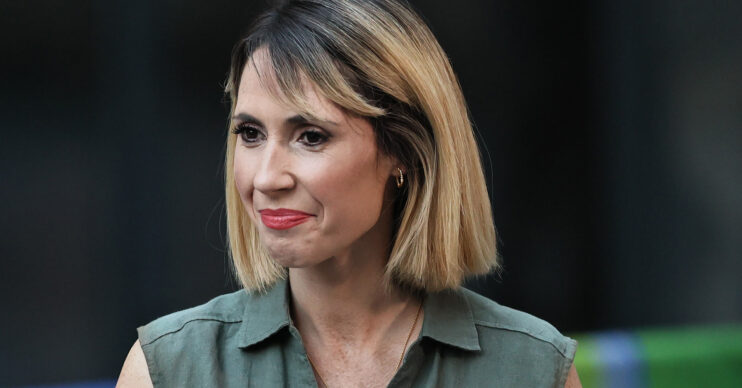 When is pregnant Alex Jones due to give birth to third baby?

The pregnant star is due in late August

Alex Jones is pregnant with her third baby – but when is she due to give birth?

The One Show presenter, 44, and her husband Charlie Thomson are already doting parents to sons, Teddy and Kit.

And the couple have been counting down the weeks until they welcome their baby girl.

When is Alex Jones due to give birth to third baby?

The star, who is currently in her third trimester, is due to give birth in late August.

Alex announced news she was pregnant back in March, during an episode of The One Show.

The star recently enjoyed a pamper day and got her hospital bag ready.

She said on Instagram: “I thought I should probably start thinking about a hospital bag. Left it a bit late. I just cannot remember what’s supposed to go in, even though this is my third.”

During a previous chat with HELLO! magazine, the star opened up on her maternity plans.

She told the publication in May 2021: “The show breaks for three weeks in the summer every year and that break will be in August this year.

“So I’ll go off on that and I’ll probably stay off. That’s the plan.”

Earlier this month, Alex said goodbye to The One Show in a touching Instagram message.

She said: “You’ll know that I’m prone to a good cry on the show at the best of times but seeing those messages at the end, especially from mum and dad and Charlie really set me off.

She added: “I’ll miss being on that sofa at 7 and of course, the brilliant team who work so hard behind the scenes.

“That is actually the last time ever that I’ll sit on that particular sofa as we are having a bit of a revamp over the summer hols.”

Alex announced her pregnancy back in March.

She said on The One Show: “It seems like a good time to share some news with everybody, and the crew and the studio.

Alex Jones Pregnancy The One Show