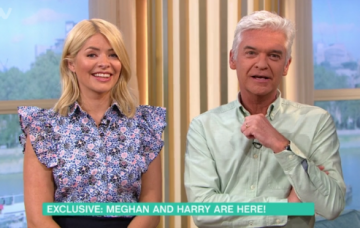 When Holly and Phil (‘sort of’) met Harry and Meghan!

Holly Willoughby and Phillip Schofield joked that Prince Harry and his fiancée Meghan Markle had joined them in the studio on Wednesday’s This Morning.

“We’re joined by some very special guests this morning, soon to be newlyweds Prince Harry and Meghan Markle,” Phil told viewers as the show opened.

She pointed out: “We are actually very proud to bring you the first glimpse of Meghan’s waxwork before it goes on display alongside Harry at the world famous Madame Tussauds.”

The waxworks looked just like their royal counterparts, wearing the exact outfits the couple wore when they announced their engagement last November.

“They are just incredible, you can’t stop looking at all the tiny details,” Holly said.

Phillip also marvelled at the attention to detail, even down to moles on the Suits actress’ arms.

He spanned a camera over the models to show how real they looked, with Meghan’s sparkling diamond engagement ring also recreated.

They then welcomed Madame Tussauds’ principal wax sculptor, Stephen Mansfield, who explained how they’d made such lifelike models – without Harry and Meghan actually sitting for them.

He said they’d had to work from images, video footage and “work out sizing using other sittings we have done with other members of the royal family” because the bride and groom were obviously too busy preparing for the wedding to sit in person.

He explained that the pair would be “part of a huge new interactive royal experience” at the London museum, “where guests can come along and get close to them.”

They will be officially on display from the couple’s wedding day – Saturday, 19 May – but there will also be a sneak peek event as the venue hold a special “stag and hen do” for the pair the night before.

Holly and Phil made the most of spending time with the waxworks while they were on loan with them for the day.

They posed for selfies which they posted on their Instagram accounts and moved the waxworks around the studio.

“Only the best contacts,” Phil wrote beside a picture of him beside the models he put on his Instagram.

Holly shared a snap with just a crown emoji in explanation.

Their fans weren’t fooled but many were amazed at just how much they looked like the real deal.

The presenters later took the waxworks outside for one segment – before joking they better get them out of the sun again before they melted!

Are you impressed with the Harry and Meghan waxworks? Leave us a comment on our Facebook page @EntertainmentDailyFix and let us know what you think!