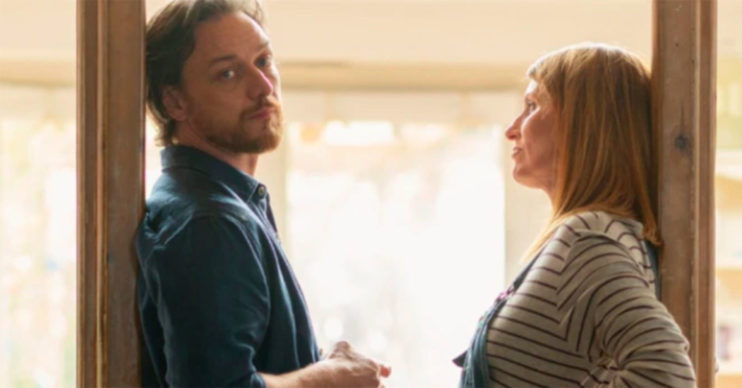 When is Together on BBC Two? James McAvoy and Sharon Horgan star as He and She

We can't wait for this one!

Together is the eagerly anticipated new BBC Two film starring James McAvoy and Sharon Horgan, but when does it start?

What’s it about? And where have we seen these cast before?

We answer these questions and more about this new series below…

What is Together on BBC Two about?

Together is being billed as a love story set in lockdown.

A comedy-drama, created by the award-winning writer Dennis Kelly, it promises to be funny and highly relatable.

The film centres around a couple who’ve been distant for years.

Read more: Get the latest on top BBC shows

After continuously ignoring one another instead of breaking up, they’re inevitably forced together during lockdown.

As they confront their differences and grievances head on hard truths come out.

Although they’re bonded over their son Arty, they don’t have much else in common.

The wife (named only as She) has a busy charity job and the husband (only referred to as He) runs a successful consultancy firm.

But after having to put staff on furlough, they’re suddenly stuck with a whole lot of nothing to do.

Who stars in Together?

Together stars Sharon Horgan as She and James McAvoy as He.

What else has James McAvoy been in?

James McAvoy, 42, is a Scottish actor who is particularly well-known for his starring role in the psychological hit film Split.

Additional prominent roles include serving as the narrator in The Bridge, Lord Asriel in His Dark Materials, Steve in Shameless and Professor Charles Xavier in X Men: Apocalypse.

James said of Together: “Dennis writes so wittily for these characters and his script had me within the first few pages.

“When I heard Sharon was involved with Stephen Daldry directing it was a no brainer.

“It’s a hilarious, heartfelt, entertaining and unconsciously funny exploration of a relationship and a couple facing real tragedy across a year we have all lived through.”

Read more: Why did James McAvoy and Anne-Marie Duff split up?

What else has Sharon Horgan been in?

Sharon Horgan, 50, is an English-Irish actress and writer who created the hit HBO series Divorce.

Acting wise she’s had roles in the likes of Catastrophe, This Way Up and Pulling.

Sharon said of Together: “I think everyone who got involved in this film had no intention of doing a COVID drama but then we read Dennis’ script and changed our minds.

“We shot this in ten days so it was a beautifully stressful experience. Working with Dennis again – and Stephen Daldry and James McAvoy, both of whom I’ve admired for years — was a joy.

“But it also felt like we were making something important. And the fact that it feels like news means that the COVID death toll, the tragedy of so many lives lost unnecessarily, has not been talked about enough.”

When is Together on BBC Two?

Together will air on BBC Two and BBC iPlayer on Thursday, June 17 at 9pm.

Will you be watching Together on BBC Two? Let us know on our Facebook page @EntertainmentDailyFix.