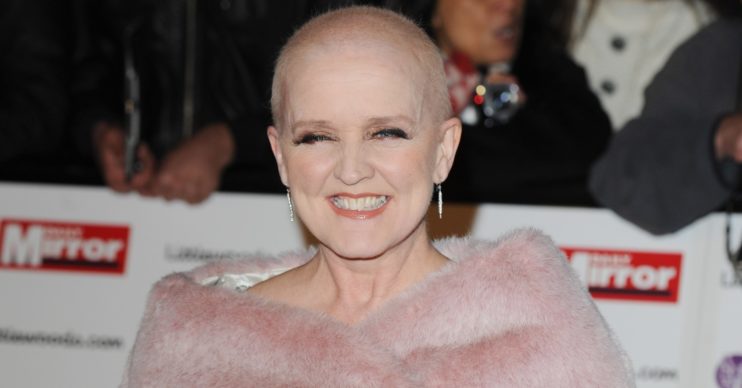 When did Bernie Nolan die? What did she die of? Sister Coleen reveals she’s considering mastectomy

Three of Coleen Nolan's sisters have been diagnosed with cancer

Coleen Nolan breaks down in tears remembering her late sister Bernie during Piers Morgan’s Life Stories on ITV1 (Thursday March 18 2021) – but when did Bernie Nolan die?

What did she die of? And why is her sister Coleen considering a mastectomy?

Here’s everything you need to know about Coleen Nolan and her sister Bernie.

When did Bernie Nolan die?

She was just 52 when she died.

A spokesperson said at the time: “Bernie passed away peacefully this morning with all of her family around her.

“The entire family are devastated to have lost beloved Bernie – a wonderful wife, adoring mother and loving sister – she is irreplaceable.”

She left behind Steve Doneathy and their one daughter, Erin, who was just 14 at the time.

The former lead singer of The Nolans was first diagnosed in 2010.

She received an all-clear in 2012 after chemotherapy and a mastectomy.

However, months later the disease returned and spread to her brain, bones, lungs and liver.

What does Coleen say about Bernie on Life Stories?

She breaks down in tears as she recalls losing sister Bernie to cancer.

Speaking about Bernie’s health battle, Piers asks Coleen whether she feels her family has been “dealt with this horrific set of cards”.

Coleen replies: “Yeah, you almost feel like it’s a curse that’s been put on you but it’s not.

“So many families go through this. But it’s hard because, well it’s cancer. It’s hard.

“Losing Bernie was just catastrophic in our family. She was the life and soul of our family. We all pulled each other through it.”

When did Bernie Nolan die? Which Nolan sisters have cancer?

In addition to the tragic loss of their sister Bernie, the Nolans have also faced Anne and Linda’s cancer diagnoses.

Coleen relives the moment she heard about Anne and Linda’s shock diagnoses which took place within four days of one another.

She tells Piers: “Me and my sisters had this fantastic opportunity to do the cruising show [The Nolans Go Cruising].

“And literally within two or three weeks of it finishing, first Anne was diagnosed again and then literally four days later Linda.

“And it was just ‘bam’. It was really shocking.”

She explains that Linda’s is terminal but she is managing it.

Coleen becomes emotional when she watches a VT from sister Linda who admits she fears dying.

“That’s the first I’ve heard her say that, that she’s scared of dying and doesn’t want to die.

“And that she was crying. That’s what hit me because she always puts on this really brave attitude.

“Linda, she says it’s not curable but it’s treatable. But, of course, you want them to say it’s curable.”

Coleen goes on to explain that Linda goes for scans every three months but that last time she went it had spread again “into her liver from her hip”.

Has Coleen Nolan had cancer?

Coleen expresses fears the family is “cursed” with cancer because of a hidden gene.

Although Coleen has not personally been diagnosed with cancer, she has considered having a mastectomy.

She says: “I’m seriously looking into elective mastectomy. I’ve spoken to a specialist so far to see.

“I’ve said, look what are my chances of this and he said, incredibly high and although we don’t carry the BRCA1 and BRCA2 gene, he said it will be gene related somewhere, it will just be a gene we haven’t found.”

How old is Coleen Nolan?

Coleen Patricia Nolan was born on March 12 1965 in Blackpool, Lancashire.

She is currently 56 years old.

Coleen Nolan gives Piers Morgan a raw and emotional interview, looking back at her life in the spotlight.

She opens up about the cancer “curse” that has devastated her family and reveals she is considering a mastectomy after seeing three of her sisters battle the disease.

She also talks about her two failed marriages and how she’s now dating in her mid-50s.

Coleen reflects on the violence she and her sisters experienced at the hands of their alcoholic father, as well as revealing a near miss with sick paedophile Jimmy Savile.