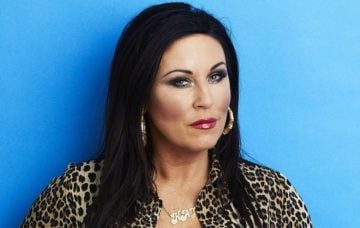 What IS Kat Slater’s secret in EastEnders?

Kat Slater has certainly got tongues wagging since she returned to Albert Square from the dead last month.

But she’s got fans speculating about what’s happened with her husband Alfie after dodging phone calls from him.

After cancelling Alfie’s call, Kat then turned to drink swigging from a large glass of gin.

The general feeling from fans is that Kat’s been up to her old tricks and cheated on her hubby.

“Did kat cheat on Alfie again?” wondered one soap watcher.

“What happened in Spain with Kat and Alfie? Please don’t let it be that Kat cheated. She’s done that countless times,” said another.

Others wondered if the call from Alfie could mean a return to Walford for the popular character.

“Kat’s back hope alfie returns now their great together,” one Kalfie fan commented.

And another hoped for the same: “Aww I want Alfie & Kat back together.”

What happened in Spain with Kat and Alfie? Please don't let it be that Kat cheated. She's done that countless times. #EastEnders

Kat's back hope alfie returns now their great together #EastEnders

While Jessie Wallace’s return to the BBC One soap was confirmed last year, it’s not been made clear whether or not Shane Richie will be following any time soon.

He hasn’t ruled out a return but the bods over at EastEnders are keeping very tight-lipped about it.

Jessie herself has said she’s enjoying Kat being single for the time being and hopes she can stay that way for a while.

She said: “I’d like Kat to be more with her family – I like the banter and them getting up to mischief. And I’d like her to be single for a while – I want to build the Slaters back up and see where it goes from there.”

What do you think Kat’s hiding? Let us know by commenting on our Facebook page @EntertainmentDailyFix!