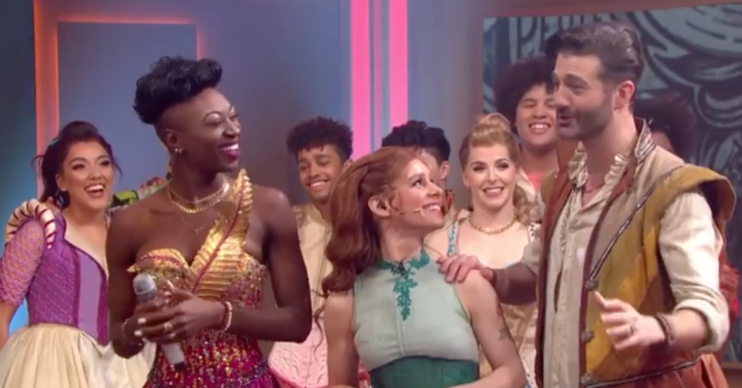 And they returned this evening for the Musicals Week results show, to give a Shakespeare performance with a twist. But was it, er, as you like it…? (Sorry.)

See you tomorrow night for our performance on the @bbcstrictly Results Show! 💁🏾‍♀️ pic.twitter.com/GXesrAsF1d

What is & Juliet and where is it on?

It’s a West End show, retelling the story of William Shakespeare’s Romeo and Juliet, alongside music from Max Martin.

But – spoiler alert – Shakespeare and his wife Anne Hathaway decide to rewrite the story. Juliet decides not to kill herself and lives her life how she wants to instead.

If you weren’t a fan of the Bard’s oeuvres at school don’t worry, this is definitely for modern tastes.

It features iconic contemporary music, from Britney Spears’ Baby One More Time and Backstreet Boys’ I Want It That Way, to Ellie Goulding’s Love Me Like You Do and Katy Perry’s Roar.

& Juliet’s Shaftesbury Theatre run is currently on hold due to the pandemic lockdown, but it will be back!

The show first ran at the Manchester Opera House before transferring to the Shaftesbury Theatre in October 2019.

Who are in & Juliet?

If you’re not a huge musical theatre fan, you might not recognise the stars’ names. Miriam-Teak Lee plays Juliet and previously blew the proverbial roof off hot ticket Hamilton.

Romeo is played by the gorgeous Jordan Luke Gage whose face you might recognise from ITV’s Cilla, Channel 4’s Cucumber and The X Factor in 2015!

Cassidy Janson plays Anne, and appeared on last night’s Strictly (Saturday, December 5) alongside Oliver Tompsett, who plays man with the quill, Will.

Is & Juliet worth seeing?

Or: to see or not to see? (Sorry again.) Well, WhatsOnStage gave the musical a five-star write-up, saying “if music be the food of love, then & Juliet serves up an all-you-can-eat buffet of the highest standard”.

Praise indeed! It has also won three Oliviers and six WhatsOnStage Awards after being nominated for a record 13.

You can find out more details about the show and tickets here.

Leave us a comment on our Facebook page @EntertainmentDailyFix and let us know what you thought of the performance.