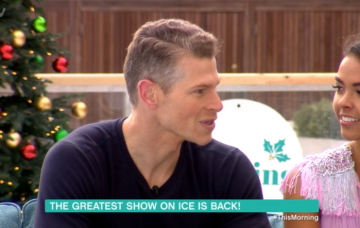 The star appeared on Wednesday’s This Morning alongside fellow pro skater Vanessa Bauer and said his mouth was left bleeding after partner Saara Alto accidentally elbowed him in the face leaving him bleeding.

Hamish said the accident happened when Sara became hesitant during a lift.

Figure skater Hamish revealed: “Oh I’ve had an injury, took an elbow to the face and almost busted my tooth out.

“She didn’t hurt her elbow, which was amazing cause it was during a lift so she was a bit hesitant and stopped and then ‘BAM!'”

Meanwhile, Vanessa admitted she’s worried about her dance partner Wes Nelson and how well he’ll perform on the rink after missing rehearsals to head off on holiday.

The Love Island hunk is currently on a break in Mauritius and Vanessa has said scheduling rehearsals with Wes can be challenging because the star is always busy and “in-demand”, but he is “very talented” on the ice.

Speaking on This Morning, she said: “Well rehearsals are going well whenever we are on the ice training.

“He is very, very, ambitious and he is very talented as well. He really wants to get far in this competition and he is so tight on his schedule.

“He has so many appearances everywhere; he is so high-on demand which is amazing for him! He is in Mauritius at the minute on holiday.”

When asked by presenter Rochelle Humes whether she was concerned about Wes missing rehearsals, Vanessa reassured her that everything will be fine because the contestant is a “natural” on ice.

She said: “Well, it does a little bit, but I am very confident that we are going to catch up on the training because he picks everything up so fast. He is a very natural skater already.”

Vanessa revealed she’s eager to compete on the show again after winning the latest series with Jake Quickenden.

She said: “It was an amazing experience. I loved every single moment of it. I literally just can’t wait to get started with the second season.”

Who do you think will win Dancing On Ice? Leave us a comment on our Facebook page @EntertainmentDailyFix and let us know what you think!