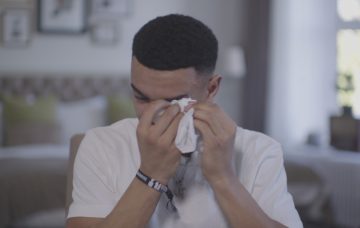 Wes Nelson in tears over Megan on Dancing On Ice

He said his break-up with Megan Barton Hanson was "really, really difficult"

Dancing On Ice star Wes Nelson grew emotional after talking about the song he has chosen for his performance in the semi-final.

This weekend, DOI’s four remaining celebs have been tasked with picking a track that meant something to them on a personal or emotional level – and it seems Wes has gone all out.

The former Love Island contestant has chosen ‘Never Too Much’ by Luther Vandross, which was the song his mum and dad danced to at their wedding.

He explains: “It’s my parents’ wedding song. My mum and dad genuinely mean the absolute world to me.

“I can’t even thank them enough for how much they’ve done for me. It’s a big thank you to them really.

“I think my mum and dad completely personify the word ‘love’.”

But reflecting on the song choice got Wes thinking about his own, recently tumultuous love life.

He said: “Of course I’ve experienced love but I’d love to love like my parents do.”

In January, Wes was caught up in a prolonged spat with his now-ex girlfriend and Love Island co-star Megan Barton Hanson.

Their relationship reportedly hit the rocks due to friction with Wes’ DOI pro partner Vanessa Bauer.

But a source quoted by The Sun claimed the couple called time on their romance after finding they were moving “too quickly” and their sex life was suffering because the relationship became “very intense”.

According to Megan, they parted ways because their goals were too different.

She told OK! magazine: “Our ambitions and goals in life are very different. Wes is younger than me and wrapped up in the fame bubble – but I still love him, which is why it hurts so much.

Commenting on his time with Megan after talking about the Luther Vandross track, a teary-eyed Wes said: “Me and Megs we had a really, really good bond and it makes me upset now to talk about it but it isn’t great, and it was really, really difficult at the time.”

Things have been just as difficult for Megan since the breakup.

She took to Instagram to open up about feeling ‘anxious’ in the wake of the split, telling her followers in a video on her Stories that “anxiety is a [BLEEP]” and posting a meme which read: “That one molecule of Serotonin trying to keep me going throughout the day.”

Is there a song that gets you feeling emotional every time you hear it? Leave us a comment on our Facebook page @EntertainmentDailyFix and let us know.