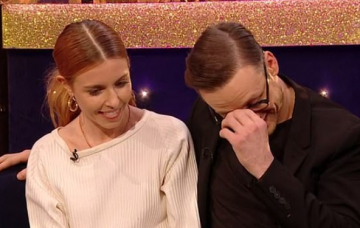 He has rediscovered his passion for dance

Kevin Clifton wept as he thanked Stacey Dooley for helping him fall in love with dancing again.

The 36-year-old professional dancer admitted this year’s Strictly Come Dancing has helped him get back on the right track after a “crazy” year in which he split from wife Karen Clifton but still embarked on a tour with her.

And he praised his show partner for her hard work in getting them to the finals.

Speaking on spin-off show It Takes Too, Kevin wiped away tears as he said to Stacey: “I’m feeling a bit emotional right now.

“I just want to, for God’s sake, I just want to say thank you to you, not only for the hard work you have put in.

“I have had one of the craziest years of my life, you’ve just been so nice to work with, I’ve enjoyed it so much.

“I know I said this the other day, but, I’ve fallen in love with dancing all over again and Strictly all over again. I love this show. Thank you for everything.”

Later in the evening, Kevin also paid tribute to the documentary maker on Instagram.

He shared a video of her achievements on the show and wrote: “Loved every second. Thank you @sjdooley”.

The professional dancer has admitted he was hoping to be paired with Stacey at the start of the series because he was a big fan of her work – and was then delighted to find she wasn’t as serious as he expected.

He said: “I really was hoping to get Stacey as my partner at the beginning because I was a superfan of her documentaries, so when she was announced on the show I was like, ‘Oh please, please please.’

“All the time. A massive idiot in a really lovely way. She’s just as daft as I am.”

Who do you want to win?