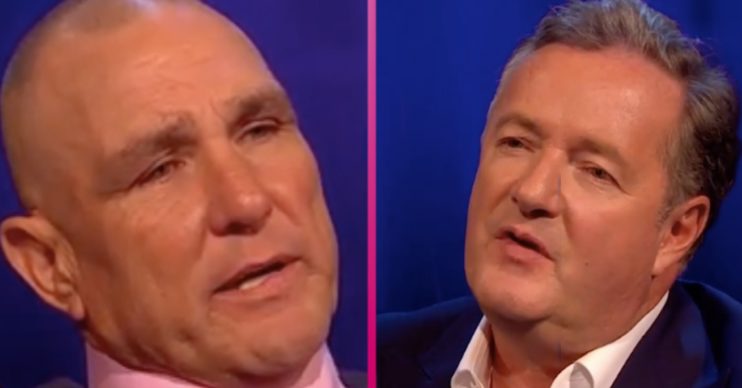 It was his second appearance on the show

Vinnie Jones thinks it’s “impossible” for him to remarry, he admitted to Piers Morgan on ITV’s Life Stories.

The 55-year-old former footballer and movie star lost his wife Tanya to cancer in July last year, and Vinnie cannot see himself tying the knot with another woman.

Recalling his wife’s death, Vinnie shared: “They said to us maybe days, maybe weeks, maybe months. I was on my knees howling.

“You find yourself going to Forest Lawn cemetery to make arrangements before she passed.

“You think you’re in a horror dream, that is the only way to describe it.

“I knew the pain was horrific, I knew it was time to stop and I begged the nurse to stop it.

Asked if he could ever marry another woman, Vinnie said: “I think that’s an impossible question to answer.

“But if you asked me if I would get married again that would be an impossibility, she wouldn’t want that.

“There won’t be another marriage, Piers, I can tell you that. It was the perfect one and done for me.”

Viewers were moved by Vinnie’s story and heaped praise on his honesty and openness.

a heartfelt, very personal #ThankYou to Mr @VinnieJones65 for telling his life stories with Mr @piersmorgan {I know it can’t have been an easy decision for Vinnie or his family to make but I believe they can help impact and change someone else’s life for the better} #LifeStories

Just finished watching this. What an emotional interview. Loved Vinnie as a player, actor and a man. He’s always so honest and his pain is so relatable to all of us in one way or another. What a man you are @VinnieJones65 👏🏻😢 #LifeStories https://t.co/56iVbazUBk

@piersmorgan with @VinnieJones65 … What a top bloke! So real and raw! Such an emotional and honest look back on his life so far and how much his wife will always mean to him 🦋 😢 I wish him only positive things for the future! #LifeStories

Meanwhile, Vinnie recently claimed he saw a “white light” appear in the air shortly after his wife passed away.

The actor can still vividly remember the inexplicable incident occurring in the garden of their Los Angeles home.

He said: “As I sat there, I noticed above me a white light. I knew it couldn’t be a star because of the cloud cover, but there it was.

“I already knew that when you lose someone you can start to look for things, for signs, so I was on guard. I never believed in any of that stuff and I wasn’t about to start now.

“But that white light was there, and there was no denying it. It definitely wasn’t a star and it wasn’t a helicopter or a plane – it was too low.”