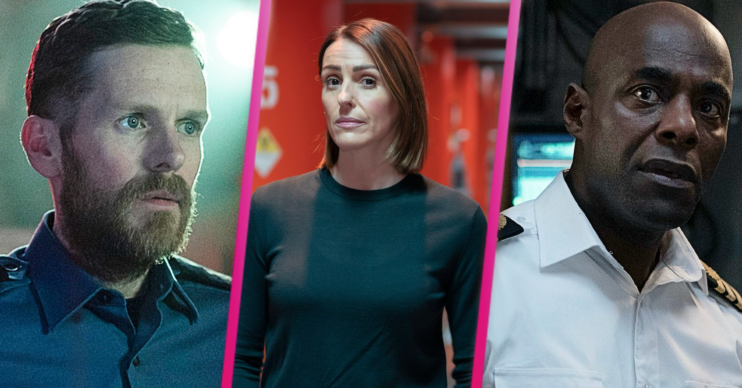 Vigil on BBC One fan theories: Newsome killed Burke and Glover is a WRONG ‘UN! – SPOILERS!

It's all beginning to heat up!

The second episode of Vigil on BBC One once again enthralled and captivated viewers last night (Monday August 30) with plenty more twists and turns.

So much so, the submarine drama once again provoked much discussion on social media.

So what are viewers saying? And what are their theories?

What happened in last night’s episode of Vigil on BBC One?

In last night’s episode, it was all kicking off.

We got to see DCI Amy Silva’s hidden trauma – in a flashback scene, Amy and her then-partner were driving in a car with his daughter in the back seat.

They careered off the road and Amy managed to save the little girl but not her partner.

On the sub the reactor was offline, it was all a bit tense. The tensest out of everyone was Lt Commander Mark Prentice.

He eventually confessed to having a pow-wow with Craig Burke and punched him before he died.

However, Glover found Burke’s green fleece with some sort of substance on it. The crew member who gave Burke CPR before he kicked the bucket was now displaying worrying symptoms.

Burke had been poisoned!

And, on dry land, Kirsten was beaten up by intruders looking for Burke’s memory stick.

A few ah come on moments in ep2 .
Theory 1
There is nothing following them ,making a lot of reference to low oxygen levels
The CPO is the baddy and the higher rank being referenced by the other officer not the XO
#Vigil

Vigil on BBC One fan theories

Many are wondering why HMS Vigil doesn’t just turn around and go home – especially now a murder has been committed.

The reason lies with Newsome’s belief that the sub is being shadowed by another enemy sub, and giving away their location would be a big no-no.

However, you do have to ask whether there is indeed another sub and Captain Newsome is going a bit Captain Ahab.

2 The Captain from Vigil on BBC One did it!

Following on from the above, some viewers think Newsome is the one who did it.

He was on the bridge barking orders when Burke was found dead, so he couldn’t have been the one to kill him in that moment.

But the fact Burke was poisoned means that he could have done it any time.

AND… if Burke was intent on exposing something on Vigil or within the Navy, it makes sense Newsome would want to save his vessel and mission at any costs.

Theory : the murderer isn’t on the sub. The poison was put on a toothbrush etc. when he was the base. #Vigil

3 The murderer isn’t on the submarine at all

We’ve seen plenty of action on dry land, with Kirsten doing some fine sleuthing in and around the naval base.

Could they both be hiding something or trying to cover something up?

One viewer certainly thinks so and suggested that the murderer is not on HMS Vigil at all.

When Amy had her freak out after being locked away by Prentice, it was Chief Petty Officer Glover (Shaun Evans) who rescued her.

And he really began to help her.

But the fact is that he seems to be everywhere and around every corner.

Glover seems to clean cut. To nice. Im not buying it. #Vigil

He had access to the disciplinary log book where Burke’s name appeared constantly, and he conveniently found the deceased’s green fleece.

Is Glover just being too nice to evade suspicion?

As one viewer said on Twitter: “Glover seems too clean cut. Too nice. I’m not buying it. #Vigil.”

Kirsten is staying over at Amy’s while she’s on Vigil, and it was assumed that they were in a relationship.

But some viewers think that Kirsten might be the little girl in the back of the car saved by Amy.

So is she Amy’s lover or Amy’s (sort of) daughter?

Yeah, we’re not buying this one -or even sure where the confusion is coming from.

Suranne Jones has spoken about Amy’s relationship with Kirsten, noting: “And there’s also a love story between these two leads that we’re uncovering.

“What’s beautiful is we have the complexity of a woman who has fallen for another human being and now has to realign who and what she thought she was.

“I guess she’s also struggling with what others will think of that new relationship.

“I did some research and spoke to a lot of women, and it can be a really tricky time for someone who has previously been straight to adapt to those new feelings and to understand them.

“So there was a relationship between Amy and Kirsten, but it stopped. When we first meet Kirsten and Amy they’re in a state of anger and confusion.

“There’s a lot going on in this piece. Both that and the criminal investigation will hopefully keep people on their toes.”

Do you agree with these fan theories from Vigil on BBC One?