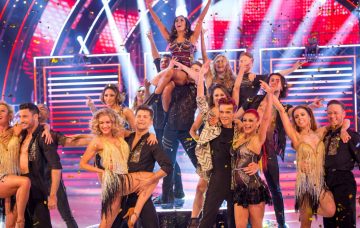 Viewing figures for Strictly Come Dancing final are in!

What a winning night!

The conclusion to the hit series saw a drop on last year’s figures, when Joe McFadden lifted the glitterball trophy in front of a peak audience of 13.1 million.

Saturday night’s instalment was seen by an average of 11.7 million, slightly up on the 11.6 million watching the end of the celebrity dance competition in 2017.

Overnight ratings made the finale the most watched episode of this year’s series.

The 2010 series of Strictly, won by actress Kara Tointon with Artem Chigvintsev, remains the most-watched final with a total audience of 14.3 million.

The show has enjoyed a bumper ratings lead over The X Factor all series, regularly pulling in almost three times more viewers than its ITV rival, which averaged 3.7 million viewers and peaked with 4.5 million at its halfway point.

The TV presenter said of her pro: “I should say something quite poignant, shouldn’t I? You know how highly I think of you.

“I think you are the biggest gem. It’s no surprise you have been in the final as many times as you have.”

Did you think it was a vintage year for Strictly? Leave us a comment on our Facebook page @EntertainmentDailyFix and let us know what you think of this story.