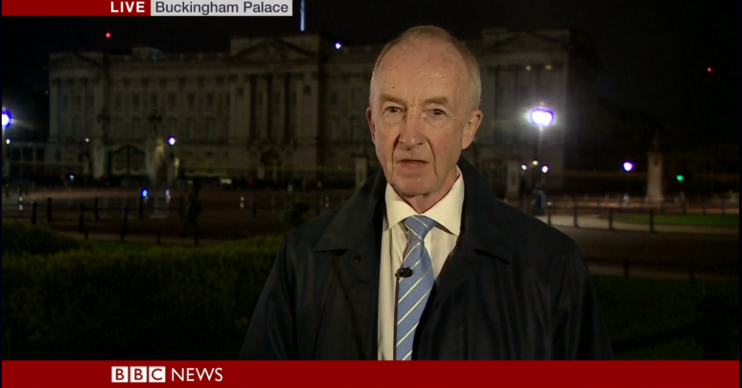 He had to hand back to the studio

Experienced BBC News presenter Nicholas Witchell lost his words and had to hand back to the studio during Monday night’s (May 6) live BBC News at 10 broadcast and viewers were worried for him and his health.

Nicholas is the Beeb’s Royal Correspondent and was reporting live from Buckingham Palace on the birth of the Duke and Duchess of Sussex’s first child.

Read more: Duchess of Sussex ‘taken to hospital for birth’

As he began his sentence saying that it was the “first Anglo-American birth in the British royal family”, he began to stutter.

“Excuse me, let me just collect my thoughts,” he said, before repeating: “It’s the first Anglo-American birth in the British royal family…”

He then stumbled over his words again and, looking down, said: “I’m so sorry, let me just once again… hand back to you, Ben.”

His colleague in the studio, Ben Brown said: “All right Nick, thank you very much indeed,” before moving straight on to another news item.

Viewers at home were clearly worried about Nicholas, with some suggesting he see a doctor.

@BBCOne Hope #NicholasWitchell is okay. Even someone as professional as he can’t be perfect 100% of the time but I am concerned after his confusion last night. Although given the cold, most of us would be even more confused!

Nicholas Witchell is one of the best Royal reporters out there! Tonight was unusual but here’s hoping he lost his trail of thought and nothing nothing more serious. Brilliant broadcaster and hope he’s okay! @BBCNews #bbc #nicholaswhitchell #royalbaby #babysussex

Nicholas’s BBC colleagues were quick to defend what happened and Paul Royall, the editor of BBC News at Six and Ten, assured everyone Nick was fine, insisting it can happen to even the most experienced professionals.

I’ve seen some snide comments about Nick Witchell. Please stop, they’re not deserved. He’s a respected and experienced broadcaster, doing his job. I don’t know what happened tonight but it’s certainly no reason to be nasty.

For the record. Nick WItchell’s supreme professionalism is — and always has been — the envy of all his colleagues. @BBCNews @BBCOne #NicholasWitchell pic.twitter.com/vscYn5QzUS

For those asking about Nick Witchell – he’s absolutely fine. Highly unusually for Nick he lost his train of thought on the #BBCNewsTen and decided to hand back to the studio. This can happen sometimes even to the most experienced and respected in busy live news broadcasting.

Did you see Nicholas’s report? Leave us a comment on our Facebook page @EntertainmentDailyFix and let us know what you think!your thoughts.