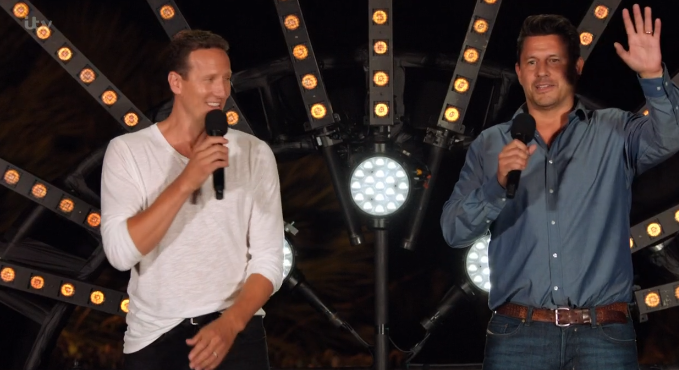 Their performance didn't hit all the right notes

Fans of The X Factor: Celebrity have been left thinking Jeremy Edwards and Brendan Cole are on the wrong show after their audition.

The former Hollyoaks actor and Strictly Come Dancing professional have teamed up to become duo: Cole and Edwards.

As they took to the stage to sing Kylie’s Love At First Sight, the performance didn’t go too well.

The criticism wasn’t as harsh as some might expect, Simon Cowell even delicately said they needed to remember how popular Brendan was from his Strictly days and not forget that the public may want to see him through to the live shows.

And Nicole Scherzinger told Brendan he had a nice voice, while complimenting the fact they were there to support each other.

But Howie Mandel, who was one of the famous people helping out the judges, wasn’t so kind. He told them it was like a miscast musical…

“A miscast musical, fish out of water, you’re very brave, they just keep twisting,” he raged to host Dermot O’Leary.

He then sat down next to his fellow contestants and said: “Don’t, I don’t want fake. I’m absolutely destroyed.”

He continued: “They were really mean and that’s upsetting, we’re trying, that’s a bit mean. I don’t like people being mean.”

Brendan, who had a reputation on Strictly for being unable to take criticism, in fact didn’t argue back, he seemed more resigned.

Fans hit out at Jeremy and suggested he had come on the wrong show.

Doesn’t like people being mean, goes to sing in front of Simon Cowell who is known for being mean 🤦🏻‍♀️ #XFactorCelebrity

Jeremy sweetheart…. You’re on a singing competition, they weren’t being mean they were JUDGING YOU #XFactorCelebrity

This guy ain’t happy with the judges… and if he hates that they’re being mean, he’s on the wrong show! #XFactor #XFactorCelebrity

Oh god shut up Jeremy you’re there to be judged that’s the whole point! #XFactorCelebrity

There was the odd voice who liked the duo…

I liked Cole and Edwards more than I thought, it reminded me of Take That. Don’t know why the panel has suddenly expanded to five though and I think Louis is a bit jealous 😂 #XFactorCelebrity

In a video diary posted to the show’s official Twitter account they managed to laugh at themselves.