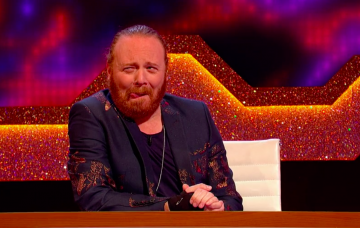 Through The Keyhole viewers spot Fatima Whitbread’s ‘sex toy’ in her wardrobe!

When you take part in 9, you’re opening your most private self up to the public – but we’re pretty sure Olympic athlete Fatima Whitbread didn’t realise she’d be quite so exposed…

Eagle-eyed viewers of the ITV show were shocked and delighted in equal measure during Monday evening’s show, when they spotted a SEX TOY in her wardrobe.

When arriving in the bedroom he joked about how the owner liked a “nice deep shag… pile carpet,” before opening the wardrobe.

He gestured at the clothes and medals, saying: “Behold the wardrobe which is packed to the [bleep] with ladies clobber.”

Keith – AKA Leigh Francis – went on: “Down here there’s a jewellery box which is filled with Eighties medallions. It’s nice.”

But the 45-year-old funny man failed to mention the infamous “Wand Massager” sitting there, which costs £89.99 and is sold by sex sites.

Viewers rushed to social media to comment on the item, with one crowing: “Casually watching Through the Keyhole and what do I spy in Fatima Whitbread’s wardrobe? A doxy wand! I mean it COULD be for genuine massage reasons but…”

Another laughed: “Fatima could have hidden her sex toy on #throughthekeyhole 😂.” A third said: “OMG………Ha ha ha haaa….!!!”

Some sounded shocked at the I’m A Celebrity… Get Me Out of Here star, with one tweeting: “Anyone else just see what I just saw in the wardrobe? 🙊😂#throughthekeyhole.” A second wrote: “Someone forgot to move their ‘magic wand’ #throughthekeyhole.” One more said simply: “Awkward.”

Does anyone remember back in 2013, when Keith discovered a sex toy in Kerry Katona’s house? Just us?

Fatima IS an athlete. She obviously gets very sore muscles that need massaging. A lot…

Do you think she has it for massage purposes? Leave us a comment on our Facebook page @EntertainmentDailyFix and let us know what you think.