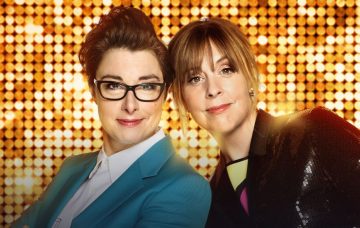 Viewers slam the nonsensical canned laughter on The Generation Game

Was the studio audience not enough?

The Generation Game hit screens last night for the first time in 13 years – and the nostalgia hit divided viewers.

The two-part special is fronted by Mel Giedroyc and Sue Perkins – and is the first return of the classic game show since Graham Norton hosted a one-off celebrity special in 2005.

The special brought back a load of the old 70s fun, with events including plate spinning, sausage making and pottery.

And while the return to the classic japes of the past felt comfortable for some, others found the the format fell flat.

Some criticised the use of canned laughter – suggesting that relying on it despite having filmed in front of an audience showed that the comedy was not up to scratch.

Others claimed that original host Bruce Forsyth would have been shocked at the new version of the show.

“#GenerationGame BBC can I have my licence fee back as this load of crap is not what I pay for,” one veiwer tweeted.

“#GenerationGame . Not funny ,Mel & Sue were as stiff as old boots, trying too hard with the ‘old favourites’ pottery wheel, sausage making etc. Canned laughter …… do I need to say more?Would have been better to leave the show to our childhood memories 😔,” said another.

“Generation Game was so awful last night Sir Bruce would be turning in his grave#bbc,” another viewer said.

“If they could press the canned laughter button a bit less, this would be just fine. #GenerationGame,” one fan said.

But there was far from universal dislike – as several fans tweeted about how much they were enjoying the rejigged blast from the past.

Some found the criticism hard to understand, praising hosts Mel and Sue, and  calling it “feel good” entertainment.

“This Generation Game show on catch up is such fun! I mean, I don’t yet know what it’s about but 10min in, its 100% feelgood so I’m happy. And @sueperkins = best ever,” said another fan.

“Let’s give them a break, the show itself was pretty much exactly what the Generation Game always was. The main difference was our expectations. Times have changed, and our sense of humours have changed. Perhaps they should have quit whilst they were ahead. #GenerationGame,” one viewer said.

The special was originally planned to be four episodes long, but has been reduced to two.

The second episode airs on Sunday.