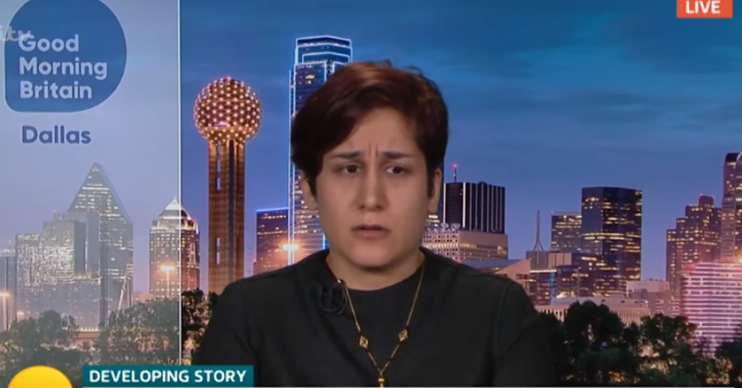 179 people were killed in the crash

Viewers of Good Morning Britain have criticised the show over an interview with a woman whose sister died in the Iran plane crash.

Intelligence officials believe the plane could have been accidentally shot down by an Iranian missile – however the head of Iran’s Civil Aviation Organization denied the rumours.

The incident was a topic on Friday morning’s Good Morning Britain with hosts Ben Shephard and Kate Garraway interviewing Navaz Ebrahim whose sister was killed in the crash.

Navaz said she became worried about her sister when she saw that the plane had crashed.

It’s unbelievable, we still can’t believe this has happened.

She explained: “I was on Facebook and I saw this news that an Ukrainian airplane crashed and I had no idea what airplane they were on.

“I started getting worried and shortly after I started googling their departure time and I found the flight had been delayed.”

She continued: “I called my mum in Iran and I asked her, ‘tell me what airline they were flying with,’ and she got worried.

‘They were two beautiful souls’ 💔

Navaz Ebrahim reflects on the heartbreaking moment she found out her sister and brother-in-law had died in the Ukranian plane crash that left 176 people dead.

The newlywed couple were in Iran to collect their wedding photos. pic.twitter.com/dMx5zzLQjd

“As soon as she said it was the Ukraine airline, I was just starting to shake and she asked me what had happened and I told her, ‘mummy, the Ukrainian airline has crashed can you check the flight number for me?’

“We were just screaming and we found out like that. It’s unbelievable, we still can’t believe this has happened. It’s so tragic, two beautiful souls, they’re still going to be remembered in our hearts.

“But they’re not coming back and it’s so difficult to believe that.”

Navaz said her sister and brother-in-law were travelling to Iran to pick up their wedding photos after recently getting married.

When asked what she thought about the rumours the plane could have been shot down, Navaz added: “I’m sure the truth will come out regardless, all I know is two beautiful souls are gone and they’re not coming back.”

Viewers weren’t heartbroken for Navaz and said she should have been given time to grieve rather than doing an interview on TV.

One person said: “Have I seen that right? An interview with a woman whose sister has just died in a plane crash? Surely the poor lass is suffering from shock?? Very insensitive GMB.”

Another wrote: “Dragging out the questions on this poor woman’s sister’s death #GMB.”

A third tweeted: “This interview was too painful. The poor lady obviously wants to just grieve at the moment. Really have to question the wisdom and sensitivity of the producers.”

#GMB have I seen that right? An nterview with a woman who’s sister has just died in a plane crash? Surely the poor lass is suffering from shock?? Very insensitive GMB

This interview was too painful. The poor lady ibviously wants to just grieve at the moment. Really have to question the wisdom and sensitivity of the producers. #gmb