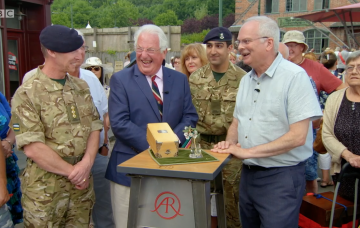 Antiques Roadshow has been labelled a “mockery” because a rare ornament valued at a jaw-dropping £1 million wasn’t a “real find”.

The Faberge flower, brought in by an Army reserve cavalry squadron, became only the third item in the history of the long-running BBC1 programme to receive a seven-figure estimate.

But, despite leaving many viewers flabbergasted, others were annoyed and insisted it broke the spirit of the show because it wasn’t from a member of the public.

He said: “It’s an utterly breathtaking object. I find Faberge things on the Antiques Roadshow but nothing of this scale.

“It’a a towering masterpiece of the goldsmith art by the most famous goldsmith of the 20th century.

He said he’d thought the flower may have “suffered over the years from being stuffed under the bed on occasions at the end of the evening” and was taken aback by the valuation.

Having a piece of Faberge flanked by army guards kinda makes a mockery of the format.
Surely it should only be joe public turning up with things to value .
I’m sure there’s plenty of institutions than can send items flanked by armed guards worth multi millions. AntiquesRoadshow

Doesn’t matter what this Fabergé think is worth, it doesn’t count because it’s not owned by a proper person. #AntiquesRoadshow

#AntiquesRoadshow so they know it’s a faberge, not really a find.

Disappointed.I don’t like the faberge flower and even more disappointed it’s a military thing…Sorry 🙁 @GeoffreyMunn1 #AntiquesRoadshow

Others jokingly tried to find their own rare “Faberge” finds in the loft, including the namesake’s aftershave.

I’m rich, found this in me mams attic – Faberge worth a mint. #AntiquesRoadshow pic.twitter.com/oSEC55liAB

After the show, Geoffrey said the ornament, made of rock crystal, gold, silver, diamond and Siberian jade, had sent his “pulse racing”.

“To make a judgment of that enormity is a tricky thing to do so I’m not going to pretend it wasn’t pressurised. This was a sensation beyond our wildest dreams really.

“It’s what we call an ‘object of fantasy’ because it has absolutely no function whatsoever except to be a source of pleasure. And it is.

“It is the rarest, most poetic manifestation of Faberge’s work that one could ever hope to see.”

The flower joins an Angel of the North model and an FA Cup trophy as one of just three items to receive a £1 million price tag on the show.

It was gifted to the squadron, then known as the Queen’s Own Worcestershire Hussars, in 1904 by Georgina, Countess of Dudley, the wife of Lord Dudley, the regiment’s second in command.

* Antiques Roadshow continues on BBC1 at 8pm next Sunday.

What do you think of the ornament? Leave us a comment on our Facebook page @EntertainmentDailyFix and let us know what you think!