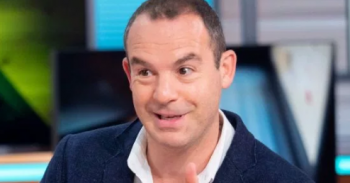 His six-year-old wanted him to take part

Consumer expert Martin Lewis brought the house down with a brave performance on All Star Musicals last night.

The 46-year-old This Morning presenter took to the stage to sing Any Dream Will Do from Joseph and The Amazing Technicolor Dreamcoat and admitted it was at the request of his six-year-old daughter.

Tonight at 6 I shall be cheering on my fellow #allstarmusicals contestants @amywalsh27 @Dan_Brocklebank #AlanTitchmarsh @TheLondonHughes @joeldommett and #TessaPeakeJones while cringing and hiding behind the sofa when my own bit comes on (the things I do for my daughter!)

He earlier revealed he has never bought a record or a CD – and doesn’t even listen to music.

However, viewers were blown away by his willingness to perform on TV to please young Sapphire – and later deluged him with messages of support on social media.

“This is so not me, but since my little girl likes musicals, she asked me to do it, and I love her,” he said.

The ITV one-off show’s judges hailed the Money Saving Expert founder’s presence during his rendition – which at one point saw him do a twirl in his flowing costume – and commented on how he had not let his daughter down.

West End star Trevor Dion Nicholas told him: “What you do definitely have is a daughter that’s going to be very very proud of you.”

“I have never been more nervous in my life,” a relieved Martin said.

One said: “Your daughter must so proud of her hero daddy!” while another gushed: “Good on Martin for giving it a go for his daughter.”

Another assured: “Good effort Martin your daughter will be proud!”

I think I totally fell in love with you tonight. 🥰 Your daughter must so proud of her hero daddy! Way to go Martin 👏🏻 #AllStarMusicals

@MartinSLewis #AllStarMusicals good on martin for giving it a go for his daughter, smashed it!

Good effort Martin your daughter will be proud #AllStarMusicals

His wife, TV presenter and former weathergirl Lara Lewington, gave him a five-star review from herself and their little girl.

Priceless… so proud of my hubby @MartinSLewis on #AllStarMusical tonight. ⭐️ ⭐️ ⭐️ ⭐️ ⭐️ from me and Sapphire (our 6-yr-old he did it for). Any dream will do. pic.twitter.com/LLxJROX3r3

Reflecting on his 12-point score and the judges’ words, he continued: “You’re going to make me cry now.”

And referring to his daughter’s words before he performed, Martin recalled: “She said, ‘Dad I’ll still love you even if you get zero.'”

Thanking his Twitter followers for their messages, Martin said he was glad to have pushed himself to take part and noted Sapphire had enjoyed his performance.

He also said he had been allowed to keep his costume and it was not stowed in his wardrobe at home.

When a fan suggested he should gift it to his child, Martin sweetly replied: “It’s a bit big for her (and her wardrobe) but everything that’s mine is hers anyway.”

What a lovely message.thank you

Leave us a comment on our Facebook page @EntertainmentDailyFix and let us know what you thought of Martin’s performance.