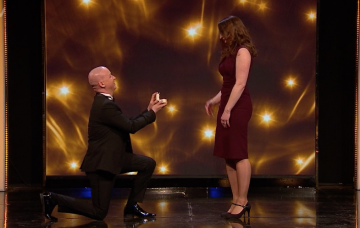 An alopecia sufferer who gained four stone and lost his confidence when his hair fell out has proposed to his girlfriend on Davina McCall’s This Time Next Year.

Ben had to lie to partner Justine for a whole 12 months that he was on the ITV show to run the London Marathon so that he could keep the secret as a surprise.

But he was actually on a year-long mission to rebuild his shattered self-esteem and pluck up the courage to ask her to marry him in front of millions of viewers.

And, happily, everything went to plan as Ben got down on one knee in the studio and produced an engagement ring, after getting mentally and physically fit again and having cosmetic surgery on his bald head and eyebrows.

Thank you all so much for everything. Ill certainly never forget the proposal! 😊

A year earlier, Ben told Davina he desperately wanted to restore his self-confidence after his hair suddenly fell out for no apparent reason.

Read more: This Time Next Year guests fail to return to the studio to update Davina

“I was waking up in the morning, there was hair on the pillow. It was really surreal.

“It was the fear of the unknown, so I completely lost myself,” he said.

“I started eating more. I was 10 stone and I’m now 14 stone. It affected every part of my life.

“The alopecia hasn’t changed the way Justine feels about me but I know I’m not the person she fell in love with.”

Ben then revealed that she was under the impression he was simply aiming to train for the London Marathon on the uplifting series.

“She might kill me, but as long as she says yes and then kills me…!”

A year later, which happened in the blink of an eye for the audience, Ben reappeared in a tuxedo with a ring in his pocket.

He said: “She’s the pot of gold at the end of the rainbow. Whatever I’ve been through, she’s been there.”

Davina then went backstage to get his girlfriend before Ben told Justine: “You’ve stuck by me through everything, you’ve seen the worst of me over the years and you’ve just been there throughout.

“I can’t thank you enough for that and I would be an absolute idiot not to want to spend the rest of my life with you,” before going down on one knee and bringing out the ring.

After she said yes, Davina revealed: “He came here a year ago to make a plan to build his confidence to pop the question, not to run the marathon.

“He has still got to do that but it was just a ruse for a whole year.”

Justine replied: “What?! I just thought he wanted to meet you.”

I loved the proposal at the end of the show, poor Ben with alopecia though 😞 @ThisisDavina #ThisTimeNextYear

Crying lots of happy tears watching #thistimenextyear and I couldn’t do your job @ThisisDavina and keep it together! Best show on TV 😍😭

I loved the proposal at the end of the show, poor Ben with alopecia though 😞 @ThisisDavina #ThisTimeNextYear

Crying my eyes out watching #ThisTimeNextYear such an inspiring show, plus love @ThisisDavina 💕

* This Time Next Year continues on ITV at 8pm next Tuesday.

What did you think of Ben’s plan? Leave us a comment on our Facebook page @EntertainmentDailyFix and let us know what you think!