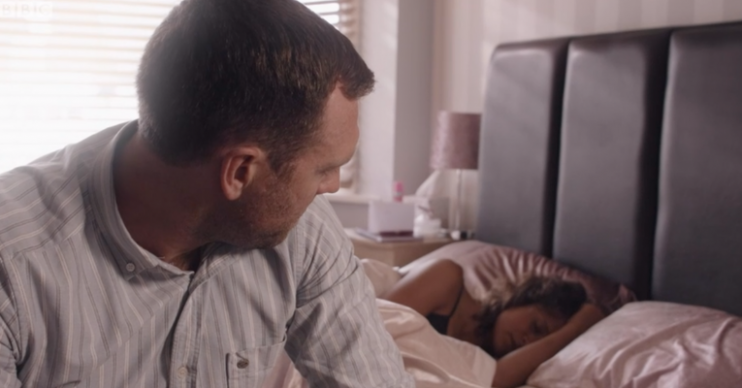 Viewers in tears after watching Jimmy McGovern’s Moving On

Tissues at the ready - the first episode of the miniseries is a bit of a tear-jerker!

The first episode of Jimmy McGovern’s miniseries Moving On aired on Manday, March 2 and viewers were left in tears at its touching ending.

A string of standalone stories, the first instalment of the eleventh series from the former Brookside and Cracker creator was titled Time Out.

The gritty interlude from normal daytime telly followed the story of Joe (played by Tom McKay), who had just been released from prison for a crime he didn’t commit – but he remains on tag.

Striking up a friendship with young lad Jack at his local leisure centre, he got chatting to his mum, Lisa.

Lisa – played by Angel Oulsen, who you might remember from BBC’s Merlin – ended up inviting Joe round for Jack’s birthday, where he gave him a present and played football with him and his pal.

The pair’s sweet relationship was cut short, when after revealing he is on license, Joe decided to spend the night with Lisa – knowing that doing so would mean going back to prison. He left her a moving letter in the morning, saying that he will be sent down by police.

As he walked towards a cop car, his note read: “I didn’t have the heart to tell you last night but breaking my curfew has consequences. I’ll be sent back to prison today. I’ve got no regrets.

“I’d make the same choose again if it meant spending one night with you. If our first night together turns out to be our last – I’d understand. I don’t expect you to wait for me.

“I just hope the future bring you as much joy as you brought me . you’re special lisa, you deserve the best because you are the best. Thanks for every single moment. Love Joe.”

But guess who was outside to greet him when he left prison? You got it – Lisa had waited for him to be released.

People on Twitter were left tearful after the happy ending, with many quick to heap praise on the creators of the show.

In absolute bits I was 👏👏

@reece_dinsdale well today’s Moving On made me cry today so no doubt yours will do the same….

Just watched BBC 1 “Moving on” about a released prisoner maintaing their innocence. Made me cry 😪, I hope our false accusers watch it. They need to see the conquences of their lies. Lies have consequences for themselves as well. #liesfollowliars

There are a few familiar faces in the series, with ex-EastEnders star Kacey Ainsworth, who played domestic abuse victim Little Mo, starring in the next episode.

The next four will be shown at the same time of 2.15pm on BBC One each day this week, but if you can’t wait until then, they’re all available now on BBC iPlayer.

Do you think Moving On deserves a prime time slot? Leave us a comment on our Facebook page @EntertainmentDailyFix and let us know what you think!