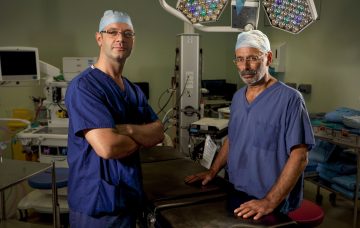 It weighed as much as five-year-old child

Staff at the Queen Elizabeth hospital received 74-year-old Jasmine Harkness, who said that five months ago she’d noticed a swelling her stomach.

Jasmine said: “I’d been to my sister’s and I felt sort of bloated. And I was getting thinner as well in the face, and I thought there was something not quite right.”

She was referred to the specialist sarcoma unit, where it was discovered she had an enormous tumour in her abdomen.

Weighing more than three stone, the tumour was displacing her organs including her stomach, kidney and liver.

It was filling her entire abdomen, from her ribs down to her pelvis – and accounted for more than a third of her total body weight.

Left untreated, the tumour would have killed Jasmine within four weeks.

Although she kept her humour up throughout – quipping to the camera: “You’ve seen the Alien movies, haven’t you?”

According to sarcoma specialists Sam Ford and David Gourevitch, there was no way of knowing whether they could save Jasmine until they opened her up.

And five years ago, they wouldn’t have even attempted such an operation.

David said: “I think what makes it interesting is the fact the unexpected is more common, that’s what keeps us on our toes.”

After being put to sleep, it took an hour to prep Jasmine for surgery – five times longer than normal.

The tumour had grown so much, her liver, intestines and stomach were all pushed aside, and the tumour had swallowed up one of her kidneys.

After a painstaking seven hours in surgery, making sure not to leave a single trace of the tumour behind, the surgeons finally removed the enormous growth.

Viewers were aghast at the size of it, and took to Twitter to praise the surgeons.

One wrote: “That tumour was the stuff of horror movies. What a brave lady”.

Thankfully, Jasmine pulled through and unsurprisingly felt like a weight had been lifted from her – literally.

She was naturally full of praise for the surgeons who had saved her life, and felt like she’d been given a reprieve.

She said: “I feel much better now than I did, and it’s nice to be on the mend. It’s like a miracle really, that you’ve got a second chance. I feel as if I could float.”

Surgeons: At the Edge of Life continues next Monday at 9pm on BBC Two.