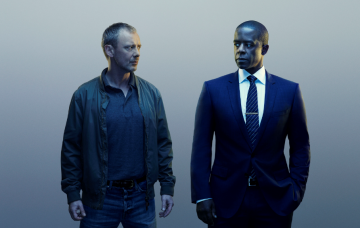 ITV has dedicated its coveted 9pm slot to one drama stripped across Monday, Tuesday and Wednesday this week.

And Trauma comes with some pedigree – its lead characters are played by John Simm and Adrian Lester, and the medical thriller is penned by Mike Bartlett, writer of Doctor Foster.

Devastated and heartbroken, Dan starts to unpick the fabric of Jon’s life…

The unsettling plot traces the aftermath of the death of teenager, Alex, who died on the operating table after being stabbed.

His father Dan grows obsessed with the surgeon who treated him, convinced that there was some malpractice.

Dan even gets a job in a coffee shop at the hospital to he can keep tabs on Mr Jon Allerton.

But there was one thing bugging lots of viewers – why the hell has the dad become obsessed with the surgeon, rather than his lad’s killer?

Still, other viewers have a theory on why this is, and believe that Dan may actually have been responsible for his son’s death… or witnessed it and done nothing to help.

He is, they suspect, deflecting his own guilt by focusing the blame on someone else.

Are you enjoying the drama? Leave us a comment on our Facebook page @EntertainmentDailyFix and let us know what you think!