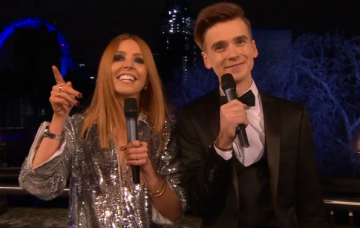 Stacey Dooley and Joe Sugg teamed up to present the BBC’s New Year’s Eve coverage to the delight of their fans.

The pair, who both made it to the Strictly final, were hailed as a “dream team” by some as they fronted the channel’s celebrations live from London in their glad rags.

Strictly champ Stacey joked she looked like the glitterball trophy thanks to her sparkly silver dress, while YouTube star Joe looked dapper in black tie.

Many viewers thought the pair did a great job as they introduced a performance from Madness before the spectacular fireworks display centred on the London Eye.

“These two are super amazing, next big thing I d like to think, cool trendy and up to date,” wrote a third praising the BBC’s choice of hosts.

Others called for the pair to be given more TV work together.

“Brilliant tonight. Fingers crossed the BBC make a series of you together. You both brighten up the day with effortless joy and cheeky banter,” said one.

“Could you do some more presenting together,” urged another.

However, some felt Joe seemed a little out of his depth and was “carried” by documentary-maker Stacey.

“Stacey Dooley carried poor Joe Sugg on the BBC 1 #NewYearsEve2018 #Madness coverage. He’s a good lad but would of been lost in the wilderness without her,” tweeted one.

“@StaceyDooley just want you to know you absolutely nailed it tonight (NYE)! I know (god bless) Joe lost it,” agreed another.

A third added: “@Joe_Sugg on the way to being a great TV presenter, with the steading helping hand of @StaceyDooley BBC needs some new blood.”

But not everyone was happy with the coverage, with some saying Stacey talked too much and didn’t let Joe “get a word in”.

One described the presenting as “absolutely atrocious” while another said the BBC made a mistake with the pair as they “wouldn’t shut up” so the start of the firework display was almost missed.

Stacey and Joe revealed on their Instagram accounts that they had a wonderful time fronting the show, both updating their Stories with backstage coverage.

Joe was joined by his Strictly partner Dianne Buswell as they danced to Auld Lang Syne. The couple confirmed they were together after the Strictly final following rumours of a romance.

Did Stacey and Joe do a good job hosting the BBC’s NYE show? Leave us a comment on our Facebook page @EntertainmentDailyFix and let us know what you think!