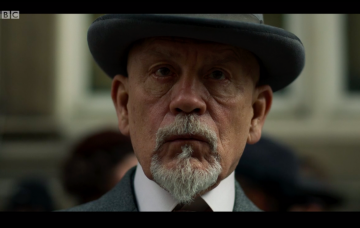 He was a PRIEST?!

Hercule Poirot has been a staple on our TVs since the eighties – and in our books even longer – so you can understand why fans are so protective of the iconic character.

And viewers were left fuming as the BBC completely changed the detective’s backstory in the series finale of ABC Murders.

The new three-part drama – set in 1933, when a killer goes on a UK-wide murder spree, using the railway network – revealed how Poirot ended up in London, working as a detective.

The flashback sequence shockingly showed him as a priest, hiding his congress in his church as soldiers attacked – but that never happened in the books.

Fans were furious. One blasted: “Terrible. What else can I say. What an injustice to Agatha Christie. I’ll go back to watching David Suchet as Poirot and the excellently filmed ABC Murders he was in. #ABCMurders.”

Another wrote: “Oh my god just gone from bad to worse Hercule Poirot now a priest has this woman never read an Agatha Christie, what next Miss Marple a nun?”

A third added: “The BBC adaptation of ‘The ABC Murders’ wasn’t so much an adaptation as a butchery of the original.”

While a fourth tweeted: “The @BBC should be ashamed of itself.”

“Really liked the adaptation, Malkovich was brilliant as were all of the actors, but you cannot rewrite history. POIROT WAS A POLICEMAN, NOT A PRIEST! Fuming,” said someone else.

Another stated: “I don’t mind the more noir setting for Agatha Christie, but Poirot being a priest with a tortured past is one step too far. He was a policeman, seemed completely unnecessary to change that #ABCMurders.”

“Poirot a priest? Come on, @BBC was that meant to be a joke? And what did the kinky scene bring into the series? This was meant to be an adaptation of Christie’s classic, not a butchery #ABCMurders #Poirot #DontMessWithPerfection,” stated someone else.

One viewer was horrified at the well-mannered and prissy Poirot doing a wee during the episode, saying: “ABC MURDERS just showed Poirot taking a [bleep]???”

Others were a little less harsh, with one commenting: “I enjoyed ABC Murders but it was quite different to original. I do not think Poirot was even religious and I cannot see him as a priest.” Another was just puzzled, writing: “Very, very confused by the ABC Murders… since when was Poirot a priest? #bewildered.”

Some, though, loved the reimagined tale, with one tweeting: “Probably the best version of Poroit I’ve seen the ABC murders was amazing. #Poirot.”

Another added: “I’ve never watched any original Poirot programmes however I am absolutely gripped and loving the ABC Murders #ABCMurders #TheABCMurders.”

A third insisted it was better than the original, writing: “Never liked Agatha Christie, thought Suchet’s Poirot was too mannered but 2/3rds of the way through ABC and I am completely captivated. Malkovich an inspired piece of casting and Ron Weasley is not overshadowed.”

The special adaptation of the classic 1936 Agatha Christie novel has been much hyped for months, with an all-star cast including John Malkovich as Poirot for the first time, Rupert Grint as Inspector Crome, and Game Of Thrones’ Tara Fitzgerald as Lady Hermione.

What did you think of this version of Poirot? Leave us a comment on our Facebook page @EntertainmentDailyFix and let us know what you think.