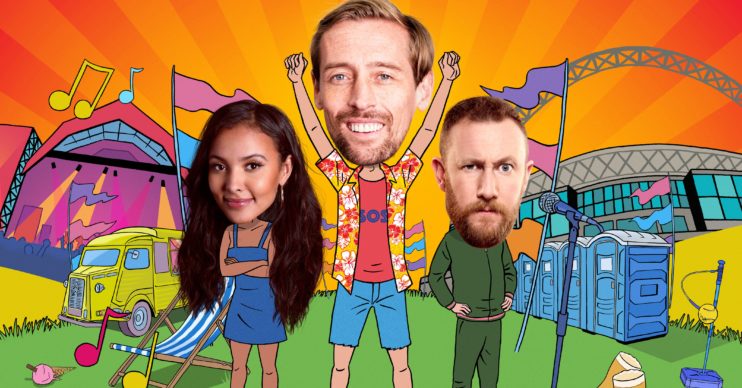 It was branded a 'car crash'

Viewers were completely divided over Peter Crouch‘s new show Save Our Summer, which aired on BBC One last night (Saturday, June 6).

Its official description reads: “Peter Crouch, Maya Jama and Alex Horne join forces to save our summer by bringing the biggest names from the worlds of sport, comedy and music back into our lives.

“There are special performances from the gardens of some music megastars, celebrity guests and a sporting tournament like no other featuring some of our biggest sport stars, and Peter takes on some extreme challenges as he tries to Save Our Summer!”

Read more: Peter Crouch told ‘not to come home’ by furious wife Abbey Clancy as he pranks her

But it looks like in some peoples’ opinion he’s failed, with one person saying the show was a ‘car crash’.

Unwatchable and most bizarre line up ever. Who ever thought Peter Crouch was a good presenter?? #petercrouchsaveoursummer

What a bloody farce #petercrouchsaveoursummer

As you can see, many Twitter users were less than impressed with the show, which took the prime time Saturday night slot. But, strangely enough, the show had a huge Marmite effect, with some people absolutely loving it.

#petercrouch #petercrouchsaveoursummer so funny. We ain’t stopped laughing. Hope there are more episodes to come

And someone else gave a bit of insight into why the whole thing is on our screens.

One Twitter user explained: “If you’re wondering why Peter Crouch is presenting a socially distanced Saturday night entertainment show, it’s because this show was originally commissioned to cover the Euros football tournament and had to be redesigned.”

Maybe getting out to work is the key to a happy relationship during lockdown, with Crouchy’s stunning wife, Abbey Clancy saying they’ve been getting along fine.

Read more: Abbey Clancy and Peter Crouch admit they ‘hated’ each other when she was pregnant

In a recent interview with Love Magazine Abbey said: “In seven weeks we haven’t had one argument.

However, in the interview, model Abbey Clancy revealed that her and former footballer husband Peter Crouch ‘hated each other’ while she was pregnant with her fourth child.

They also discussed homeschooling their kids during lockdown.

She added: “He sold the idea of retirement to me as a completely different thing, where we would be going on lunches together and holidays, all lovely things.

“I think it was partly having four kids – he was like, ‘I’m not staying at home with these. I am getting out.'”