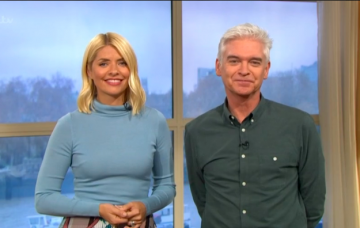 Viewers divided over Holly Willoughby’s return to This Morning

The presenter is back at Phil Schofield's side

Holly Willoughby and her long-term co-presenter Phillip Schofield couldn’t have looked much happier to finally be reunited on Monday’s This Morning.

But those watching at home weren’t quite so sure, with some blasting the I’m A Celebrity… Get Me Out of Here! host as “boring,” “irrelevant,” and with “too big an ego”.

The 37-year-old presenter has been away in Australia covering Ant McPartlin’s stint in the jungle, while her This Morning job was covered on the sofa by Rochelle Humes.

And with Holly’s return on Monday morning, producers, as well as her best friend Phil, 56, celebrated with a hilarious dancing Gif, tweeting: “Oh, did we mention… @HOLLYWILLS IS BACK! 🎉.”

But not everyone watching at home was so pleased to see her. One viewer wrote: “#ThisMorning bring back Rochelle Humes, get rid of that blond holly dopehead, all is forgiven 👍.”

Another blasted: “@thismorning it should be renamed Phil and Holly show, so boring talking about themselves…” While a third tweeted: “That Holly’s irrelevant now, the show doesn’t need her no more.”

A fourth added: “Holly is back then, worse luck, just saying #thismorning,” and one more said: “I’m thinking Holly has come back smugger than smugfield #ThisMorning.”

Another didn’t like the way she spoke to chef, Phil Vicks, writing: “Watching Holly undermine and grin with smug at Phil Vicks’ expense, she really is a nasty piece of work, far too big an ego 😡#ThisMorning.”

Others seemed to be sick of the sight of the presenting pair generally, writing: “Flipping Phil and Holly’ 🙄. Can’t watch any programme they’re on anymore.”

Holly and Phil are also current hosts of Dancing On Ice, which launched on Sunday to the worst ratings in the show’s history.

Others though, were delighted to see the blonde star back on their screens, with one commenting: “@hollywills @thismorning welcome back holly 😄😄😄😄😄😄😄.” While another gushed: “Yay! Welcome back 🙂 we’ve missed u so much 😘.”

Yay! So happy @Schofe and @hollywills are back on #ThisMorning @thismorning Missed them! 😝😝😝😝😝X pic.twitter.com/HCwlpAtosn

A third tweeted: “Soo happy to see Holly and Phil back together again (yaaay) .. 🙄…my mornings are now going to be complete again. #lovehollyandphil X.”

A fourth insisted: “This Morning, the way it should be with Phil and Holly. You must NEVER go away again Holly!!!”

The mum-of-three also celebrated her return on Instagram, sharing a picture of her outfit and captioning it: “Morning… and we’re back!!!! Home on @thismorning at last… and today’s #hwstyle💁✨ skirt by @reiss knitwear by @insidejigsaw shoes by @gianvitorossi 💖.”

It does feel like Holly’s been everywhere we look lately. But is that such a bad thing?

What did you think of Holly’s return? Leave us a comment on our Facebook page @EntertainmentDailyFix and let us know what you think.