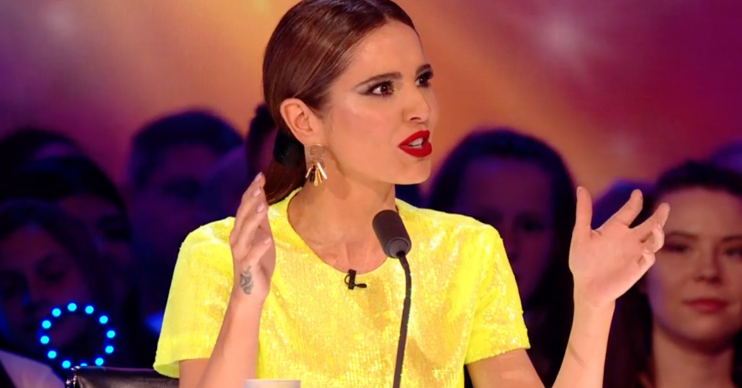 Were some haters a bit 'green-eyed' themselves?

Fans of The Greatest Dancer were bewildered over the weekend after noticing one of the dance captains had made a significant change to their appearance.

Cheryl’s ‘changing’ eye colour left some viewers perplexed after they noticing her peepers – usually dark brown – appeared to be green.

The 36-year-old ex Girls Aloud singer had shown off her new look on Instagram, alongside her stunning make up.

She also wore an eye-catching sparkly red jumpsuit for the BBC One dance show – but it was her alteration to her iris’ pigmentation that really captivated the attention of those watching at home.

Some shocked viewers couldn’t get over just how different she looked.

What’s up with Cheryl’s eyes?

Another person tweeted: “I can’t believe how different cheryl looks without brown eyes???”

But Saturday’s episode wasn’t the first time observers suspected Cheryl of switching up the look of how she looks around.

The weekend before, someone noticed: “What’s up with Cheryl’s eyes? #thegreatestdancer.”

And while her green eyes came in for a lot of praise from some corners of social media, not everyone was convinced.

One onlooker wrote: Just catching up on Saturdays TGD but I’m really confused as to why Cheryl Cole is wearing coloured contacts?! Who is she foolin we know you don’t have grey eyes?”

“Can anyone explain the trend for augmented eyes/fake iris trend. It’s horrible. Notice Cheryl’ and weirded me out. #GreatestDancer,” another person put forward.

And not everyone was taken by surprise by the fashion decision.

“Cheryl’s back with the contacts,” one tweeter noted.

@cherylofficial gives her take on THOSE shady comments from Matthew, @otimabuse says a final goodbye to @valedance27 , and @matthewmorrison gushes over his two solo Semi-Finalists. #GreatestDancer

“I like them a lot but it is weird seeing her without her beautiful brown eyes.”

Another person tweeted: “I see Cheryl has the weird eyes in again! #GiveItUpCheryl #GreatestDancer.”

A third person remarked: “Cheryl still has the dodgy contacts in then #GreatestDancer.”

And someone else joked: “Can’t wait for Cheryl to come out with purple eyes next week.”

However, there were still plenty of Cheryl’s fans to stick up her online against the haters.

And another person wrote: “I wanna know where Cheryl gets her contacts cause I want them.”

Ever wanted to learn @cherylofficial's iconic 'Promise This' choreo? Well, now you can. Share your videos with the hashtags #GreatestDancer #CherylSquad

– The Greatest Dancer airs on BBC One on Saturday at 6.30pm