TV host Piers Morgan has been accused of being stuck in the past after he appeared to mock the Chinese language earlier today on Good Morning Britain.

The 54-year-old presenter enraged viewers by referring to "ching chong ching" on the ITV breakfast show as he ranted about Peter Phillips, the son of Princess Anne, appearing in an advert for a Chinese dairy farm.

His fellow GMB host Susanna Reid didn’t seem very impressed, either - but Piers later insisted he was only targeting Chinese milk, not Chinese people, with his remark.

Susanna sighed at him at the show: "Taking the Mickey out of foreign languages is rather 1970s." 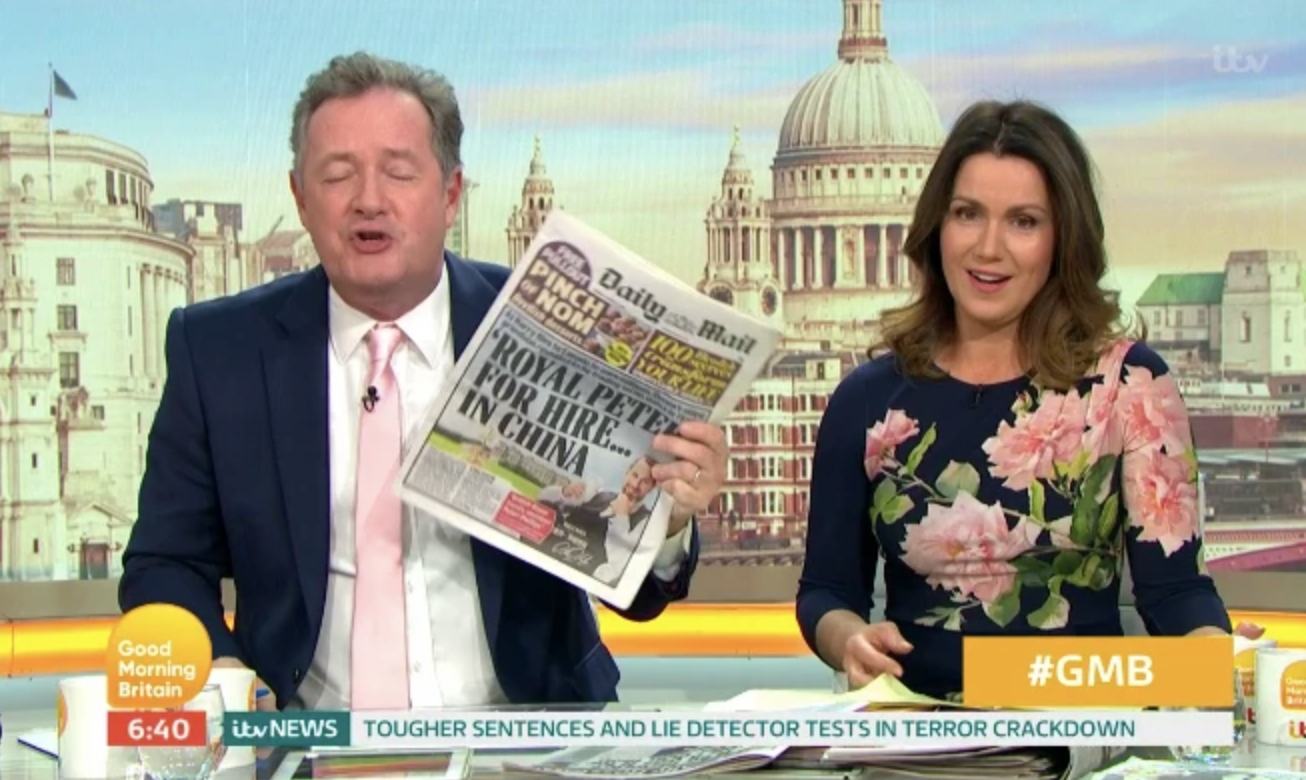 'What's the name of it? Ching chong ching?' (Credit: ITV)

However, Piers later tweeted out: “I was mocking a member of the British royal family appearing in an advert for Chinese state milk, not Chinese people.”

Nonetheless, some of those watching at home felt Piers had said enough to warrant being fired.

What's the name of it? Ching chong ching?

One person addressed the show's Twitter account: "@GMB Really, you think it is ok for Piers to mimic the Chinese language? That is as bad as Jade Goody and the poppadom incident. He really needs to shut up."

Another social media user went even further, writing: "They should sack Piers."

I was mocking a member of the British royal family appearing in an advert for Chinese state milk, not Chinese people. https://t.co/IO5TEXUYmf

A third person predicted: "@GMB will sack Piers by the summer."

"Piers Morgan, what is he good for? ABSOLUTELY NOTHING say it again to sack him from GMB and newspapers he doesn’t represent anything about British views," fumed yet another person.

And a fifth person went on to claim the original comments were "garbage".

"Sack him @GMB," they tweeted.

Just saw @piersmorgan on GMB mocking Chinese people on the way they speak, what are the odds he faces no criticism for it... there’s an example for Laurence Fox of white privilege

"If you don't sack him, you send a strong message that your show is ok with [this]."

Piers had managed to crowbar in a dig to to Prince Harry and Meghan Markle as he spouted his tirade against milk fan Peter.

He banged on: "I like Peter Phillips, I met him at a lunch last year, but that is not a good look for the royals. Flogging Chinese State owned milk - it's a state-owned dairy farm.

"The big question for Meghan and Harry in their brave new world where they think it's going to be ethical and lovely but people are going to be chucking millions at them like Peter Phillips because he's royal.

"He's a nice guy, he's not a HRH - the problem is other people. All these actors go to China to do these terrible ads thinking we'd never see them and Peter thinks the same."

Piers continued: "Oh Peter, for God’s sake man. This is the problem. People want association with the royals, they want to exploit them. He should be flogging milk made here.

"What's the name of it? Ching chong ching?"