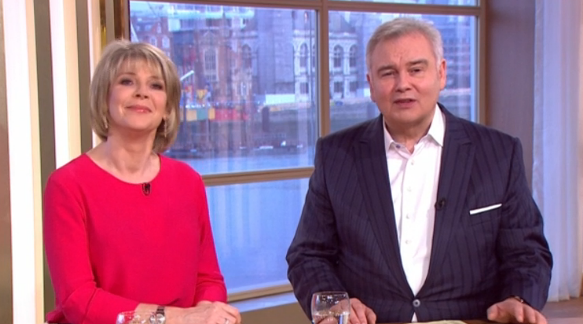 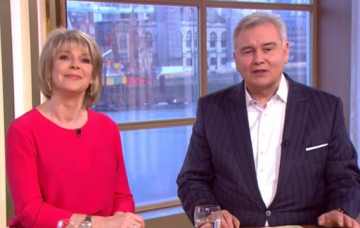 Eamonn approved but Ruth wasn't too sure...

This Morning viewers were left unsettled after being introduced to a man who takes his dead stuffed dog travelling and out to bars.

Dog owner Mitch Byers, from Portland, Oregon, appeared on Thursday’s show via video link from the US.

And he was joined by deceased pooch Phoebe.

Phoebe, a Jack Russell, died four years ago and rather than cremate or bury the pup, Mitch’s mum decided to have him stuffed.

“It was all done in secrecy,” said Mitch.

“My mum had this crazy idea to do it for fun, really. No place in Oregon would allow her to do it because it was too emotionally upsetting for them, so she found a place in Colorado and didn’t tell anyone.”

“She feels like normal and has her real fur,” said Mitch, adding that a good taxidermy would run into several thousands of dollars.

Eamonn Holmes seemed fascinated by the idea and said he’d love to stuff his own dog when she dies, but wife Ruth Langsford won’t let him.

When asked if Mitch gets comfort from having Phoebe around him, Mitch answered: “Absolutely. I take her on all sorts of family trips and to friends’ houses and apartments to meet their other dogs.

“Other dogs are wary of her at first because, of course, they are expecting her to jump and play.

“They’re mainly curious about what’s going on with the whole thing.

“I can take her on a plane. I’ve looked at the laws.

“And I contacted a few breweries here in town and explained the whole situation. They’re like, ‘We don’t allow dogs.’ I said she was actually taxidermy and not alive and they’re like, ‘Oh, yeah, nothing in our laws that say you can’t bring her in, so bring her in.’ I take her to bars.”

Mitch said he’s not able to have a live dog right now as he’s always travelling, but suggested his parents may get another dog in a few years’ time once they have stopped travelling as much.

And “creepy” was an opinion shared by many viewers.

Other viewers, however, took the attitude of “each to their own”.

Meanwhile, Mitch’s Instagram account @mydeaddogandme has more than 2,000 followers, showing plenty of people are supportive of his family’s choice.

After he bigged up his This Morning appearance today, one fan told him: “Tuned in, in love with Phoebe already!”

Another said: “Just watched you guys! Absolutely love it.”

And a third supporter added: “If it makes you happy, why not!”

Mitch also won himself new fans thanks to the interview, with one telling him: “Just watched you and following you now. I’ve always had lots of pets and personally myself I couldn’t do it. I think it’s lovely you and your mum find comfort in it. Phoebe looks lovely.”