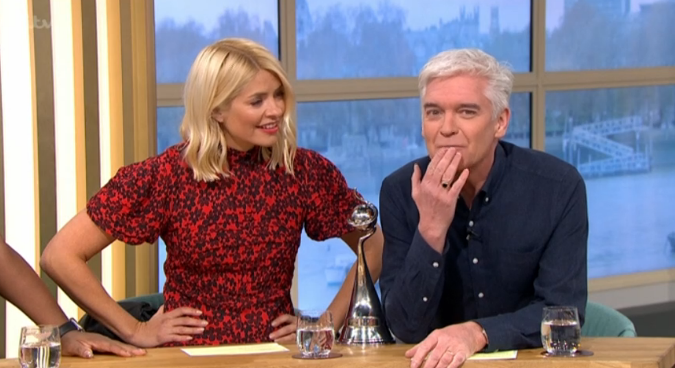 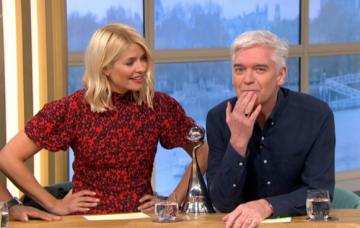 Holly Willoughby and Phillip Schofield turned up to present This Morning a little worse for wear after Tuesday night’s National Television Award win.

The show scooped the gong for Best Daytime for the ninth year running and the presenters celebrated with a drink or several.

But as they turned up for work late and joked about being hungover, fans at home were less than impressed – especially as they’d branded Gemma Collins unprofessional just last week.

After Gemma reportedly left Dancing On Ice, which Holly and Phil also present, early, and kept everyone waiting during rehearsals, Holly said that although she loved Gemma “there needs to be a little bit of professionalism that comes into any work you do. Just a little pride in your work. You just shouldn’t do that.”

But while many fans at home agreed with Holly at the time, after today’s hungover antics people think she’s being a little hypocritical.

Venting their fury on Twitter they called Holly out for it.

Last week @Schofe & @hollywills said #GemmaCollins was unprofessional as a result of her behaviour behind the scenes on #DancingOnIce #DOI… tell me, who’s supposedly ‘hungover’ and ‘drunk’ on live tv right now??? #thismorning #ntas @thismorning 🤔

@thismorning#ThisMorning
And Holly and Phil told @GemmaCollins1 that SHE was being unprofessional and here we are again, they come in to work with a #hangover and not a word is said.
Pot. Kettle. Black.

Although many didn’t reference the Gemma incident directly, they were also sick of Holly and Phil’s hungover behaviour.

One even declared it poor taste given they cover serious subjects such as alcoholism on the show.

I am getting really sick of hearing Holly’s squeaky laugh on @thismorning it’s actually more irritating than fingernails down a blackboard! Both are getting on my nerves with the whole ‘hangover’ crap. How long are they going to milk it for?? So unprofessional #thismorning

#ThisMorning grow up Holly and Phil the whole hangover thing is unprofessional and boring. Take the day off and let someone else present the show

@thismorning Could you two maybe stop glamourising drunkenness & going to work hungover? Most working adults would be fired for being so unprofessional. How can you ever have a serious feature on alcoholism after treating getting wasted as a joke? It's poor taste 🙄#thismorning

Read more: Holly and Phil miss start of This Morning after heavy night

The bad behaviour began in 2016 after the presenting pair turned up wearing the same clothes from the night before after winning the award.

In 2017 they vowed to get tattoos instead of drinking, but that promise never materialised. And last year both Holly and Phil struggled to get through the show.

Today’s episode saw Phil a lot worse off than Holly as he tried to maintain his composure while the Hairy Bikers cooked a full English breakfast pizza for them.

Did you think Holly and Phil’s behaviour was unprofessional? Leave us a comment on our Facebook page @EntertainmentDailyFix and let us know.