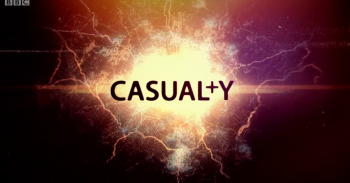 Viewers blast BBC for cancelling Casualty and other top shows

Casualty and singing show All Together Now will not air this evening and telly fans really aren’t happy about it at all.

The FA Cup clash between Manchester United and Wolverhampton Wanderers will be shown on BBC One instead, meaning football will shown throughout the 7.30pm to 10pm slot.

One unhappy fan on Twitter suggested the fixtures should be aired elsewhere.

They fumed: “With the price of a TV license being £150, it’s about time the BBC launched a sports channel. Huns, I don’t want to watch overpaid men kick a football about tomorrow, I want the usual All Together Now and Casualty.”

Another echoed that sentiment, blasting the decision as “disgraceful”.

They wrote: “That’s right @BBC spoil everyone’s enjoyment of Casualty by showing [bleep] football. Why isn’t this rubbish on in the afternoon or shown on another BBC channel ? How totally disrespectful to the actors, writers, producers of our long running Saturday night series. Disgraceful.”

A third said simply: “Okay but the fact casualty isn’t on for two weeks because of football hurts me.” 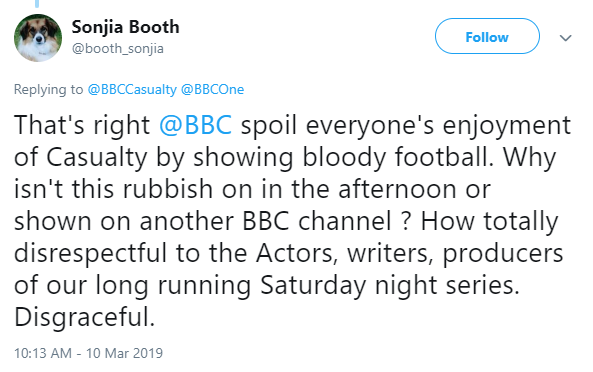 A number of big shows have been moved around the TV schedules recently.

EastEnders was pulled yesterday to be replaced by Comic Relief and Loose Women was dropped for the Cheltenham races.

It seems our favourite medical dramas have been hit the worst though, as Holby City was also ditched due to the Brexit vote earlier this week.

Holby fans were equally as vocal on Twitter, with one asking “how dare they?” and another raging the cancellations made them “absolutely furious”.

Another said the week’s TV scheduling had been “awful” and blasted the BBC’s “#TVfail”.

One fan said their grandma was so “livid” Holby City wasn’t on, she was compelled to break her silence on Brexit. Ouch! 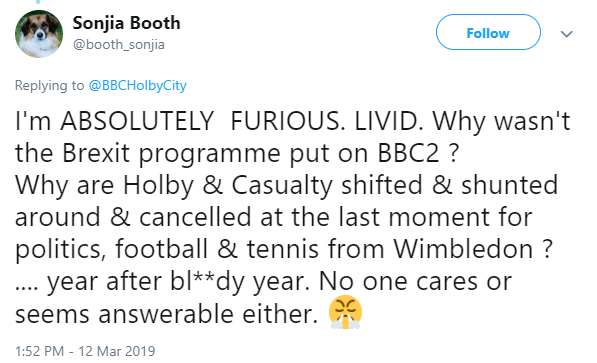 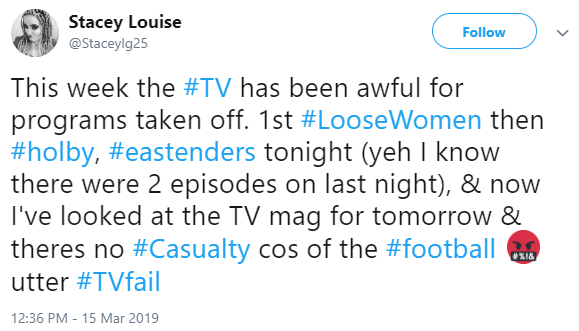 A Holby City double bill will air on Tuesday and Wednesday (March 19th and 20th).

Unfortunately, Casualty fans will have to wait until Saturday (March 23rd) for the next episode.